By Caroline Clemmons for Beth Trissel

Here I am, Caroline Clemmons, substituting for Beth Trissel. Beth is ill and on her way to recovery, but this month needs to concentrate on feeling better. Picture her snuggled down with her pets in a comfy chair and reading. At least, I hope that’s the picture. She’s a lovely, gracious person and a wonderful writer.

One of the many areas in which Beth is an expert is plants that heal or kill. Now picture me giving an evil laugh. Bwahaha. Okay, I don’t kill actual people, just my characters as I say below.

My current trilogy, Men of Stone Mountain, is about the three Stone brothers: Micah, Zach, and Joel. Aren’t brothers enough of a link for a trilogy? Yes, but there’s another link to these three books. Each involves poison in some way. No, I’m not bloodthirsty and I don’t intend to use my knowledge to wipe out any real people. Trust me. In this trilogy, however, I wipe out a several people. Ah, the joys of being a writer.

Studying herbal medicine is sort of a mini-hobby. I’ve taken the excellent herbal class Beth Trissel occasionally offers, as well as perusing my books on folk medicine. Pioneers relied heavily on their ability to recognize healing plants as well as those that discouraged pests and vermin. No Walgreens or WalMart around in those days.  Early settlers also learned that what can heal, if administered improperly, can harm. Don’t you suspect a lot of so-called natural deaths were helped along before modern medicine and forensics discouraged using potions and tinctures to kill? Maybe I’m suspicious by nature, but I believe a lot of troublesome people died prematurely, helped along by a loving family member.

“My first two wives? Each took sick and died on me.”

BRAZOS BRIDE, is a western historical romance, but it’s also a mystery. Hope Montoya, the heroine, is a smart woman and figures out that someone is poisoning her. Who and why are more difficult problems.  Until she knows, she can trust no one who has access to her food or medicine. She vows to fight for her life, but she’s so weakened by the poison that she can’t fight alone. Enter our hero, Micah Stone. Do you hear the “1812 Overture?” You know, I’ve heard a highbrow is someone who can hear that music without thinking of the Lone Ranger. But I digress.

Micah also has enemies in their area. He fought for the Union Army and the Civil War has left many North Texas citizens bitter.  Micah’s own brothers fought for the Confederacy. Despite their political views, the Stone brothers are closely knit. When Micah was falsely accused of killing Alfredo Montoya, Hope’s father, Zach and Joel came to Micah’s aid. The story opens two months after the trial in which Micah was acquitted. A severe drought has Micah desperate for water. His own water sources have dried up and his cattle are dying of thirst. Micah and his brothers and ranch hands haul water daily from Zach’s spread further west.

Here’s a review of BRAZOS BRIDE:

A NIGHT OWL REVIEWS BOOK REVIEW | Reviewed by: Barb
I found this book to be very entertaining. I read it in one afternoon because I had to know who was trying to murder Hope, the heroine. Her interaction with Micah and their relationship was the heart of the story. I really got into the story and the characters. The mystery of just who of the many characters were the evil ones kept me reading and turning pages (so to speak) on my Kindle. I was unable to stop reading this book until I finished it. That really says something for the author's plot and cast of characters. I enjoy these types of books, but this one was exceptional. I will be patiently waiting for the stories of Micah's brothers, Zach and Joel. I see the potential for some very good stories following these brothers' lives. Good job in making me want more.
Mar 28, 2012 | B007HS10SY
Top Pick 4.5 stars

Isn’t that a lovely review? 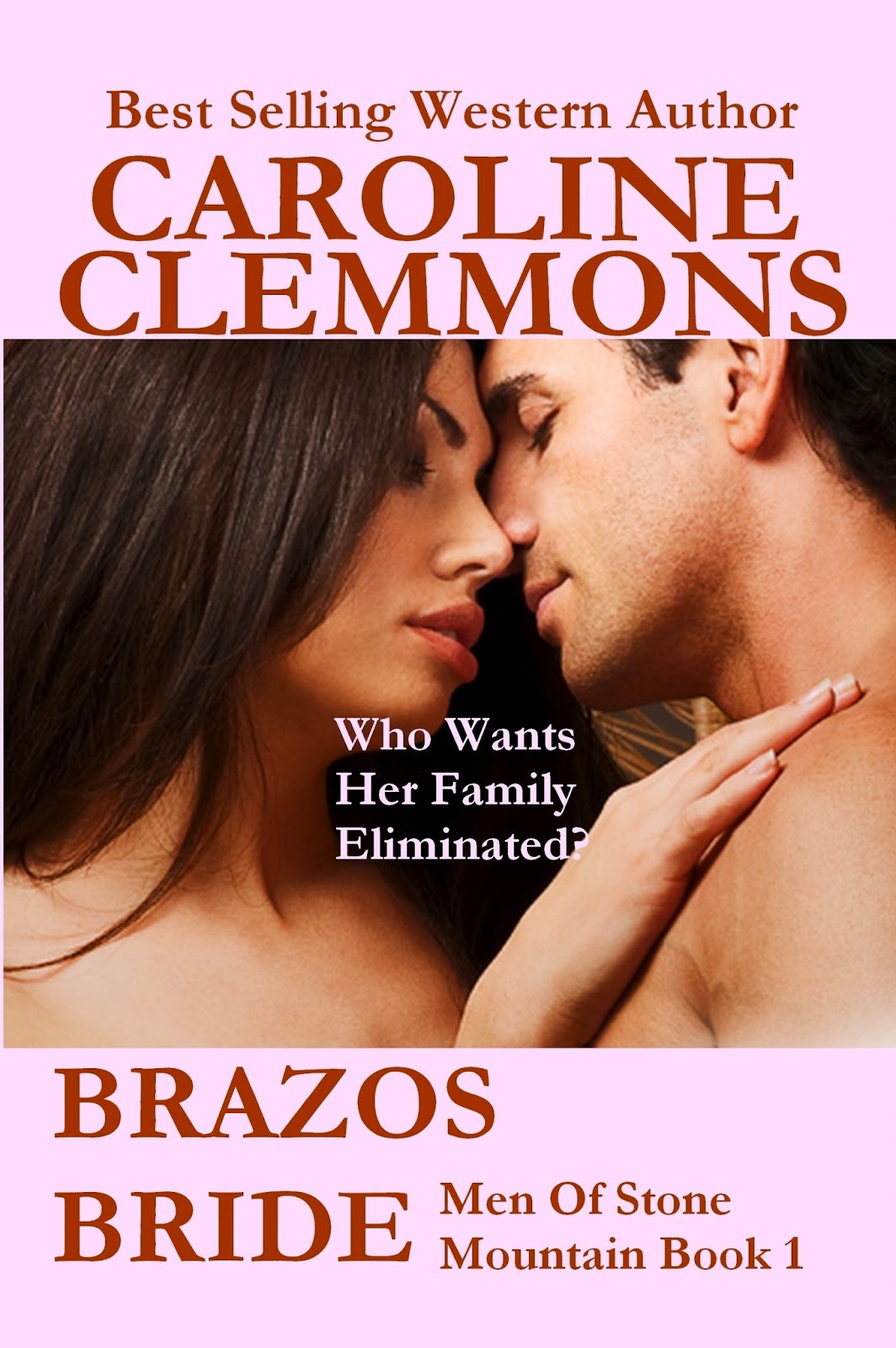 This villain is vicious and almost non-stop. After an attempt on their life on their wedding night, here’s an excerpt of a retaliatory strike the next day when they stop by Micah’s ranch on the way to Hope’s. Bert and Slim are Micah’s ranch hands. I’ve already mentioned that Zach and Joel are his brothers (and their stories are HIGH STAKES BRIDE and BLUEBONNET BRIDE):

She savored a bit of the stew, then bit into a fresh biscuit covered with syrup. Closing her eyes in bliss, she chewed slowly. “Oh my, this is wonderful. Never have I tasted better stew. And these biscuits are light enough to float away.”
Bert blushed and lowered his head. “Thank you, Miz Stone.”
Micah’s dimpled smile demonstrated his appreciation for her comment. Why should that please her so?
Hope learned more about their struggle for water, how they'd hauled barrels of it from some spring a good ways off on Zach's land, apparently their only remaining dependable source of water.
She remembered her father’s angry reprimand and the blow he’d delivered when she’d suggested he install windmills on their land. Her eye was swollen and purple for days, but he told the servants she’d fallen against the door. They knew, of course, and wouldn’t look at her until the bruises faded. She pushed the sad memory aside and returned to the present. Did she dare make a suggestion to Micah?
She gathered her courage. “Have you thought about a couple of the Mitchell Self-Governing Patent Windmills? I saw an ad for them and plan to install them in several spots on my land.”
Excitement gleamed in Micah’s eyes. “Hey, I saw an ad also, and I’d love to have them. Until now, I haven’t had the cash.”
He’d planned the same thing. And he didn’t appear to resent her suggestion. She wanted to shout with glee. He actually respected her opinion, and didn’t say a woman had no business thinking such thoughts. “Oh, well, maybe we can get a discount on the freight and cost if we order together.”
Zach nodded. “Good idea, Hope. I wouldn’t mind a couple of them myself, soon as we get your and Micah’s problems settled.”
They talked about where the windmills would be placed and guessed how long it would take them to arrive. All through their discussion, Hope was treated as if her ideas were equal to those of the men. Their response surprised and soothed her. Maybe this arrangement would work for everyone.
Micah laid his spoon aside while Bert served up the pie. "I need to talk about something less pleasant. Someone tried to kill us last night." For a minute everyone stopped talking and stared at Micah. The only sound was a horse’s nervous whinny.
Bert cocked his head toward the window and paused as if listening to the horse, but it quieted so he resumed serving. Everyone forked up the pie while Micah explained about the ordeal.
"Sheriff know?" Joel asked between bites.
Micah nodded. "Surprised me. Acted halfway decent about it. Said he'd keep investigating, but don't suppose anything will come of it. Without a witness, it could be anyone."
"So what's your plan, Cap’n?" Slim asked.
Micah swallowed and said, "I'm leaving you and Bert in charge here. For months now someone’s been poisoning my wife. You know her father was murdered, and now someone's tried to kill us. We have to be on guard all the time. You two are charged with taking care of this place while the rest of us take care of my wife." He dug into the last of his pie.
Slim looked indignant. "Poisoning a purty lady like Miz Stone? Low down sidewinders!"
"You’re right about that.” Micah pushed his plate aside. “Tomorrow you can start the cattle toward the river. One of us will stay at the Montoya ranch with Hope so she's always protected, but the other two will be over to help."
Always protected. She repeated the words in her head while she nibbled at her pie. The words reassured her and she looked at each of the men at the table. She might not have her home to herself, but safety in numbers popped into her mind. She no longer faced danger alone. Things would be all right now.
Bert asked, "Reckon I ought to go cook for you? I could make sure no one messed with Miz Stone's vittles."
Zach smiled apologetically at Hope as if he'd known she should have been included in the decision. "Our two aunts will arrive soon to help our new sister, maybe today if they caught the stage."
Micah said, "You're badly needed here, Bert, to look after this place."
Bert actually smiled. "Me and Slim can do it, cain't we?"
Slim nodded and started to say something, but another horse whinnied and this one sounded alarmed. Slim frowned and sniffed the air. "You smell smoke?"
Micah sniffed at the same time. "Something burning, Bert?"
"Nope, I done put the fire out on account of how dry it is. Covered it good with dirt." He rose and ambled to the window.
"Lord A’mighty, the barn's afire!"

By the way, HIGH STAKES BRIDE (Zach Stone's story) and BLUEBONNET BRIDE (Joel Stone's story) also are mysteries as well as western historical romances. Each also have poison involved in the plot. Both books are available at most ebook vendors. For a bargain, the boxed set including all three books is MEN OF STONE MOUNTAIN and is available from Amazon at:
http://www.amazon.com/Men-Stone-Mountain-Caroline-Clemmons-ebook/dp/B00DTGQXLW/ref=sr_1_11?s=digital-text&ie=UTF8&qid=1390918197&sr=1-11&keywords=caroline+clemmons

Posted by Caroline Clemmons at 8:14 AM