Much Ado About Book Titles
by Jacquie Rogers

Titles are important. They, along with cover art, are the first things we see when we browse the book shelves or an online store. And they’re danged hard to figure out, too. I struggle with titles, and generally call upon my friends for help early on with the process. It’s true—no friend is safe while I’m trying to think of a title!


When I wrote Much Ado About Marshals, single titles were king and few authors wrote series—New York publishers said series didn’t sell in the romance genre. It turns out their wisdom wasn’t so on target when the industry shifted toward ebooks (it’s still evolving), and series took the throne.

The first three books in my Hearts of Owyhee series were written as single titles, even though they contained crossover secondary characters and were all set in Owyhee County, Idaho Territory. But once Much Ado About Marshals was released, readers asked for the second in the series. I’d written another book, The Comfort Palace, which had finaled in RWA’s Golden Heart contest, so I used that for the second book and changed the title to Much Ado About Madams, since it’s set in a brothel. The third book was originally titled Roped, Tied, and Married—featuring a woman in a non-traditional role. That one became Much Ado About Mavericks. 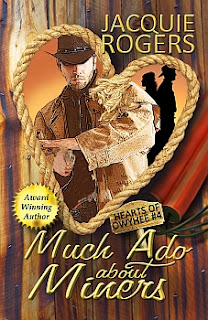 No fourth book was planned, but readers wanted me to write Iris’s story. Much Ado About Marshals starts off with the hero, Cole, shot while attempting to thwart what he and the bank teller (Iris) thought was a robbery attempt. Cole’s the hero in that book and Daisy, Iris’s sister, was determined to marry him because she thought he was Oreana’s new marshal. So when Iris shot Cole, the die was cast—she had to have her own book. And you know it has to start with her shooting the hero. That book’s title is Much Ado About Miners. Are there any miners in it? Sorta. Kade McKinnon’s family owns the Ten-high Straight Mine, and there’s another miner character, too, but that’s about it. 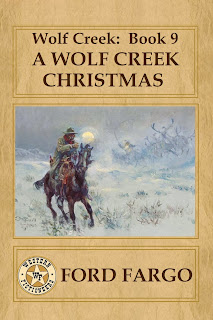 You can bet that when I start another series, I won’t ride into a box canyon with my titles—they’ll be much more open. Troy Smith has done a good job with titling the books in the Wolf Creek series (written by a collaboration of authors under the house name Ford Fargo). Book one is Bloody Trail, book two is Kiowa Vengeance, book three is Murder in Dogleg City, etc. When we pick up Night of the Assassins, we know it’s set in Wolf Creek and we know who the characters are, because it’s part of the Wolf Creek series, same as A Wolf Creek Christmas or the next book (in which I contribute chapter 1, to be released in March), Stand Proud.  None of the titles have any similarity and all describe very well what to expect in the novel.


I have a few more series planned, all novella series. One is the Soiled Doves series, a spin-off of Much Ado About Madams. One is The Muleskinners, and the first story, Judge Not, is in the anthology, Hell on the Prairie. I get the rights back on that soon, so I’ll reissue it and then publish the second story in a few months. Another series is the High-Stakes Heroes series. None of these will be titled so similarly as the Hearts of Owyhee books, which everyone calls my Much Ado series. Well, that’s not the series name!


Give me your take on titles. Do you prefer similar titles, as in the Hearts of Owyhee series, or would you rather have totally different titles, such as in the Wolf Creek series?

Happy 2014!  May this be your best reading year ever. ☺
Jacquie
Website * Twitter * Facebook * Pinterest * Newsletter
♥ Hearts of Owyhee ♥ series, ♦♣ Sleight of Heart ♠♥
'Twas the Fight Before Christmas (, Book 9: A Wolf Creek Christmas)
A Gift for Rhoda (Wishing for a Cowboy)
Coming soon: A Flare of the Heart (Hearts and Spurs)
Posted by Jacquie Rogers at 5:54 PM