Like most authors, I would love for my book to make a best seller list. How to do that? Is it the story? Most certainly. Is it the writing? Most definitely. Is it luck and our readers? Most probably. Truth is it's all those things that contribute to putting our hard work on a New York Times or USA Today best seller list.

The following is a post about an unassuming but determined writer who made that coveted list her first time out. In researching articles for this post, I did find that Grace Metalious never had a particularly happy life and went downhill after her success in the publishing world. 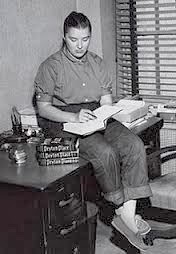 She started from humble beginnings and wrote from an early age. After graduation, she married her husband, George, but continued to write after becoming a housewife and mother. Grace was thirty in 1954 when she began work on her manuscript about the dark secrets of a small New England town. She gave her novel or WIP (work in progress) the working title of, The Tree and the Blossom. It wasn't long before she realized her book needed a fictional town and after much deliberation with her husband, Peyton Place was born.

Peyton Place was published September 24, 1956. It was reviled by the clergy and dismissed by most critics, nevertheless, it remained on the New York Times best seller list for over a year and became an international phenomenon. Commenting on her critics, she observed, "If I'm a lousy writer, then an awful lot of people have lousy taste", and as to the frankness of her work, she stated, "Even Tom sawyer had a girlfriend, and to talk about adults without talking about their sex drives is like talking about a window without glass." 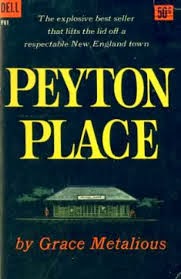 As a young teenager, I remember finding an innocuous little paperback book stuck behind other books in my parent's bookcase headboard. It was quite an educational read that summer and I suspect I wasn't alone in my secret reading. Grace Metalious died September 25, 1964 of cirrhosis of the liver from heavy drinking at the age of thirty-nine.While her life and success burned out quickly, she has the distinction of penning a publishing phenomenon.


Thanks for stopping by,
Carra

Posted by Carra Copelin at 1:00 AM