Why do we like to scare ourselves? I love a good paranormal, but wouldn't be dragged to a slasher movie. Some terrors I can do without. No, I have never seen a Nightmare on Elm Street or a Freddie movie.  Never will, either.

Remember when The Exorcist came out. Hmm, I'm dating myself here. Friends talked me into going with them to the local drive in (dating myself again) to see it.  We waited after it had been out several weeks thinking we had heard about all the scariest parts.

It's dark and a little chilly so the windows were rolled up. We were doing okay until there was a sharp knock on the driver's side window. (I think this happened when Linda Blair's head was spinning.) Of course we all screamed and popcorn went everywhere. Some guy was going around to all the cars trying to get donations for a charity. Could he have chosen a worse time or place?

As I was putting out my Halloween decorations, I thought about our fascination with witches, vampires and zombies.

Gahhh, I hate zombies.  Frankly, watching the dead stumble around dropping body parts is gross. Also, I just can't see a romance with a guy whose ear or nose is hanging by a tread of rotting tissue.  Still, the books seem to be selling well. Sorry, I just don't get that. 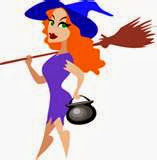 Now witches, I can see a romantic paranormal story about a witch. I'm currently working on a funny romantic suspense involving Daisy, a witch who can't stay out of trouble. The story just popped into my head one night and I couldn't wait to start writing her story. I'm jealous of her ability to cast spells turning idiot lechers into pigs. Now that would be a handy little spell. 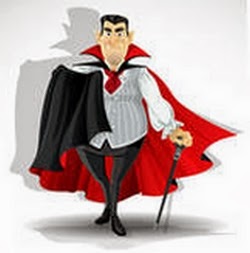 Yeah, I'm skirting around the whole "undead" thing with the vampires. When you really think about it, they are cold, extremely pale and the fang situation could make a kiss painful. Still, all those superpowers are attractive.

Zombies just bump into each other looking for tasty brains.

Some people prefer total reality. No paranormal or fantasy for them. Life is all the reality I need and the fantasy of magical powers doesn't hurt anyone.  But, oh I would love to be able to fly or flick my fingers and create whatever I wanted.