Okay, so what does that mean?

My bio reads that I have spent 30 years in medicine. This is true, I have, in several different areas from trauma medicine to interventional cardiac medicine on to breast cancer diagnosis and therapy.

Over the years, I watched happiness and much heartache as families have experienced tragedy and loss. I've had the experience of watching someone I grew up with, have a heart attack at an extremely young age because of their drug use. Imagine their surprise when I walked into their ER room.

One night in the late 1980's, I helped a young man who'd been hit by a car while he was training for his on-road bike race. When the helicopter brought him in, he was severely injured and in a coma. I knew him personally and had watched that young man grow up, babysat him while I was in high school.

Life experiences such as these are very real and very raw. They  don't ever leave, and really, don't even dull in my memory bank.

So, how does one go about removing the "R" out of "Raw" and giving that "AW" moment?

That's the beauty of being a writer. I use my pen to re-focus the events that muddle around in my brain. I decided to take the "R" out raw as best as I could, and turn them in to some sort of happy ending. While many love stories suffer loss and tragic episodes, it's the happily ever after that the reader wants. That's where the magic of the pen, the writer's magic wand, if you will, comes in to play.

"Give the reader the "AW moment."

I've learned a very valuable lesson after releasing my first book in the Running Series, Running To You, by leaving the story with the cliffhanger. Readers want the happily-ever-after, or so they've repeatedly told me. They want the "Aw moment" and I want to give it to them. Now that I've released book 2 of the series, Two Sides of a Heartbeat, the response has been great. The hero/heroine finally get their much anticipated "aw moment."

In my upcoming release of Chasing Air, coming out this fall, I write about an emergency room physician, Dr. Makenzie Holder. You will see how I take my magic wand and turn some of the tragedies that she is exposed to, into a heartwarming story of betrayal, sacrifice and finally, real love.

One lucky commenter will receive a free download of both Running To You and Two Sides of a Heartbeat.

"The greatest compliment you can give a writer is to tell a friend about their work."

"I never stopped loving you, I just stopped begging for you. There's a difference." DeLaine Roberts, Two Sides of a Heartbeat 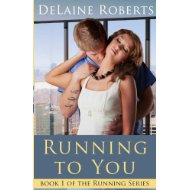 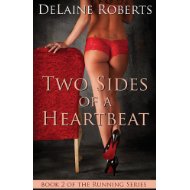