I don’t know who originally said that and I couldn’t find a precise answer to the question on Google. In any event, today, I’m talking about humor and the Dixie Cash books, co-written by me and my sister. We’re soon to release an audio version of OUR RED HOT ROMANCE IS LEAVING ME BLUE. 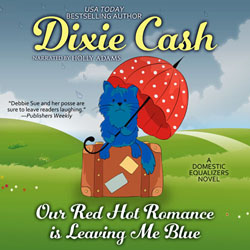 From the beginning, humor and laughter have been the goal of the Dixie Cash books. And from what we’ve heard from readers, most people think the adventures of Debbie Sue Overstreet and Edwina Perkins-Martin (the Domestic Equalizers) are hilarious. Redneck humor, to be sure, but nevertheless, funny.

Tomboy Debbie Sue is a former ProRodeo barrel racer. When her life and her career went to hell, she became a hairdresser. Doesn't everybody? In her first divorce from her present husband, she won an ancient gas station she couldn’t sell and had to think of something to do with the old building, so she turned it into a beauty salon. A perfectly logical solution to the problem.

Debbie Sue is also frustrated detective who wants to be taken seriously, but she’s often thwarted in that effort by her husband, James Russell Overstreet, Jr. He's a  crime-fighting real Texas Ranger who *is* taken seriously.

Her former lover, Quint Matthews, who still contends for her affections even though she’s married, is a former ProRodeo and PBA bull-riding champion with an ego as big as Texas, who is now a wealthy rodeo stock contractor.

All of this causes Debbie Sue endless frustration and copious conflicts.

Debbie Sue’s partner, Edwina, is a career hairdresser with multiple husbands and kids, who considers herself glamourous, dresses to the extreme in sixties and seventies fashions, wears rhinestone be-decked cat-eye glasses, delivers sage advice and mostly wants to have a good time. Her husband is 6’6” and weighs 275 pounds. He’s a retired US Navy SEAL who now owns his own big rig and trucks from coast to coast. Edwina likes to boast that he liberated Kuwait and knows three hundred ways to kill you quietly.

Doubting they are qualified to take on true crime fighting, Debbie Sue and Edwina, through their private investigative agency, the Domestic Equalizers, try to confine their detective work to following cheating spouses and significant others and Edwina does a little matchmaking on the side. “Don’t get mad; get even” is their motto. Unfortunately, real crime always finds them.

And that’s the foundation from where we started the Domestic Equalizers series.

So where does humor originate? Most experts agree that it originates in “truth.” Truth-based humor is laced with cynicism and irony. Jay Leno. Jimmy Kimmel. Larry the Cable Guy presents corny, but truth-based humor. Dennis Miller is on the other end of the spectrum. Intellectual humor for the informed, but truth-based, nevertheless. George Carlin used to be one of my favorites. One of the most cynical human beings ever, his humor was the ultimate in organic humor.

In terms of TV shows, “Two and a Half Men” has to be one of the funniest shows to make it to TV lately. You might not be a Charlie Sheen fan, which I’m not; and you might not like the blatant immorality portrayed on that show, which I don’t. But you have to admit that when Charlie Sheet was in it, it was funny. The irony derived from a kid living with a libertine uncle and an inveterate fumbler father constantly but unsuccessfully looking to get laid was too delicious not to be humorous.

The old Mary Tyler Moore show with its cast of off-the-wall characters was one of the funniest shows on TV. A character in that show was Chuckles the Clown.  In polls of the funniest particular scenes, the funeral of Chuckles is always listed near the top. There’s a short list of people and shows that were truly funny—Carol Burnet, Tim Conway and Harvey Korman in The Carol Burnet Show, Lucille Ball in I Love Lucy. If you examine these shows, you will see that even Lucy and Ethel’s crazy antics were humor from the gut.

So getting back to the Dixie Cash books. Raw, truth-based humor and a subtle, cynical observation of our fellow man. If you want a good laugh, maybe you should get acquainted with Debbie Sue and Edwina. You could start by listening to OUR RED HOT ROMANCE IS LEAVING ME BLUE. It will soon be out through www.audible.com.

And hopefully, before the end of the year, we'll self-publish and release a new Dixie Cash extravaganza in print. It's a story about a man and his dog. And a parrot.
www.annajeffrey.com
www.annajeffreyauthor.wordpress.com