Author Sightings In the Wild by Laura Hunsaker

In my day job, I work at an elementary school. Every now and then, I've had parents recognize me, or ask if I'm that Laura Hunsaker a la Romancing the Stone.

But the other day, I had a parent stop by the front office and ask if I would sign her book. You guys. That was the coolest feeling in the world! Sometimes I feel a bit like I'm signing someone's yearbook Stay sweet and have a fun summer! But for the most part, I try really hard to make it personal for them. I've had book signings, and I've been to conventions, and signing a book never gets old. But, having someone spot you in the wild, so to speak, is just another level of awesome that I don't think I was prepared for.

Have you ever spotted an author in the wild?

And in case you were curious, the book she asked me to sign was this one:

Roughing It  and I'm Kenzie MacLir in this book. 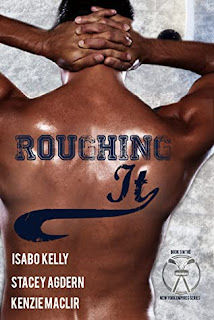 Caught in the Crossfire by Stacey AgdernBryce Emerson only agreed to draw an account of the Empires Goalie Tryouts to humor his brother. But when a vision convinces him the woman who saved his prized pen from a snowy grave is in danger of being injured by a faulty mask, he takes it upon himself to make her a new one.Goaltender Carly Fein is trying out for the New York Empires, and the last thing she needs is the complication of an artist. But when she agrees to let him make her a new mask, Bryce Emerson finds his way under her skin.Can Bryce and Carly figure out what happens when they’re caught in the crossfire of love and hockey? Or will the stress of new love and competition drive them apart.Crashing the Net by Isabo KellyBillionaire Connor Evans needs a challenge. Trying out for the New York Empires’ hockey team fits the bill, even if it is just a publicity stunt and a way to shut his twin brother up. Running into the woman who left him six years earlier, a woman he’s never gotten over, is not part of the plan. Once he sees Matty, though, Connor knows he can’t let her go again. But he’s got secrets he can’t risk sharing. And Matty is the one person who could uncover those secrets if he lets her get too close.After traveling the world, Matilda Thomson is ready for a real job and a more stable life. Her internship with the New York Empires will give her the experience she needs to move into that future. But first, she has to face Connor again, and one of the most painful losses she’s ever experienced. The only way she can move forward is to confront her feelings and risk her heart one more time.Heat and passion spark as hot as ever between them. But trust doesn’t come easy. And if Connor can’t open up and let Matty in this time, he’ll lose her forever.Against the Boards by Kenzie MacLirKyle Sandberg is living his best life. He’s one of the top hockey players in the world. Has two amazing best friends and all the sarcastic hockey t-shirts he could wear. After his own family turns their backs on him, he’s happy playing for the Empires and hanging out with his own found family. What he doesn’t want is his pain in the ass twin brother back in his life or a mate.When paramedic Faith Church left Puerto Rico for New York, she had zero intentions of getting involved in the local pack. Having had her fill of pack politics, she was ready to go lone wolf. But being left alone was too much to ask when her cousin was the Alpha’s mate.What neither was counting on was Fate, having her own plans for them. A chance encounter at a traffic accident changes everything. Kyle and his wolf are willing to go with Fate’s plans. But Faith, having finally broken away from her pack’s expectations wants nothing to do with Fate, or Kyle. Too bad her wolf disagrees…

Posted by Laura Hunsaker at 2:00 AM