If you follow me on Facebook, or anywhere else, you will know that I love roses. I am sharing a rose post from the past and hope you enjoy it.

Excerpt from my herbal, Plants for a Medieval Herb Garden in the British Isles,

(Old fashioned rosebud)
The English Tudor Rose is the heraldic floral emblem of England. The red rose was the badge of the House of Lancaster during the English War of the Roses. The badge for the House of York was the white rose. When Henry V11 took the crown of England from Richard 111 in battle, 1485, he ended that particular war. He introduced the Tudor rose, combining a red rose, representing the House of Lancaster, and a white rose, representing the House of York, as a symbol of unity after the English civil wars of the 15th century which later came to be called the Wars of the Roses.
The exact species of the Lancaster’s Red Rose is uncertain, but it’s thought to be Rosa gallica officinalis, also known as the Apothecary’s Rose, possibly the first cultivated rose. We used to have this ancient variety, but it finally succumbed to a hard winter and needs to be replaced.

Rosa gallica officinalis
“My wild Irish Rose,
The sweetest flow'r that grows.” ~Chauncey Olcott
I have an old-time rosebud salve that I love made by the American based Rosebud Perfume Company, founded in 1895 by George F. Smith. They still carry the original salve but have expanded their product line; all are gluten-free, a plus for those of us who are severely intolerant.
Roses have an ancient history. The first cultivated rose likely originated in Persia and spread out from there. The part used is the flower, although the hips are also employed in tea, jam, jellies, syrups... The hips are high in vitamin C and antioxidants. Some varieties of roses produce better hips for this use than others. Rosa canina, commonly known as the dog rose, is one that does.
Back to the flowers. The most favored rose for medicinal use is the above mentioned dark red rose, R. gallica, also known as the Provins Rose and the Apothecary’s Rose. Only flower-buds just about to open are collected, and the lighter colored lower portion is cut off from the deep red upper part. For making a confection, they are used in the fresh state. For an infusion, the flowers are thoroughly dried first and stored out of humidity.

(Abraham Darby Rose from my garden. A David Austin rose.)
The old pink cabbage rose is used for making rose water by distilling the fresh petals. A soothing ointment of rose water (cold cream) is also made by blending melted wax and almond oil with rose-water and rose oil.
Culpepper gives many uses for red, white, and damask rose cordials and conserves in the treatment of internal maladies including fever, jaundice, joint aches, weakness of the heart and stomach, fainting, an aid to digestion and fighting infection, comforting the heart and strengthening the spirit. Rose ointment is recommended for most any skin condition.
In his 18th century Family Herbal, John Hill gives a recipe for Honey of Roses that sounds delightful. He specifies using red roses. And I doubt he means modern cultivars, but old.
Honey of Roses Recipe: “Cut the white heels from some red rose buds, and lay them to dry in a place where there is a draught of air; when they are dried, put half a pound of them into a stone jar, and pour on them three pints of boiling water; stir them well, and let them stand twelve hours; then press off the liquor (liquid) and when it has settled, add to it five pounds of honey; boil it well, and when it is of the consistence of thick syrup, put it by for use. It is good against mouth sores, and on many other occasions.” (Which means it has many other uses.) 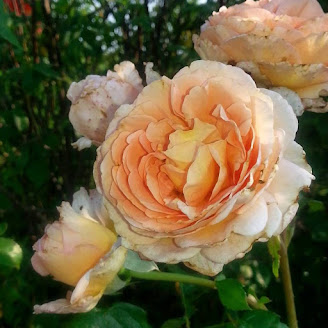 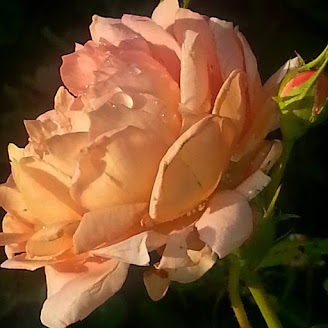 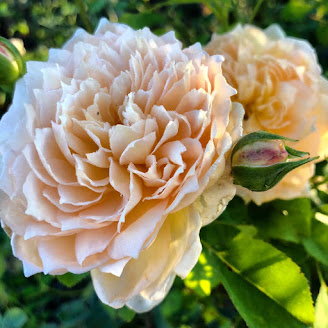 Plants for a Medieval Herb Garden in the British Isles available in kindle and print at Amazon.
An illustrated collection of plants that could have been grown in a Medieval Herb or Physic Garden in the British Isles. The major focus of this work is England and Scotland, but also touches on Ireland and Wales. Information is given as to the historic medicinal uses of these plants and the rich lore surrounding them.
Journey back to the days when herbs figured into every facet of life, offering relief from the ills of this realm and protection from evil in all its guises.~
“It was June, and the world smelled of roses. The sunshine was like powdered gold over the grassy hillside.” ― Maud Hart Lovelace, Betsy-Tacy and Tib