How Ranger Stopped Being Ranger Danger by Bea Tifton


I’ve wanted a Maine Coon Cat since I started reading one of my favorite series, The Cat in the Stacks series by Miranda James. The protagonist owns one, and Diesel is an important part of the books.

A month ago, a woman on my neighborhood app put up a notice that they had a Maine Coon Cat available for free adoption. One almost never sees Maine Coon Cats for adoption, and certainly not FREE.  I thought about that notice for a week. It just kept popping up.


Finally, three weeks ago, I called her. Yes, the cat was still available. He would be two years old in May, so he’s still a youngster. Her daughter originally brought him home but she was moving to Alaska and didn’t want to take him. The woman hadn’t found someone she felt was right yet. Yes, she was still taking appointments. How about the next day? I couldn’t believe it, but I set it all up.


When I met Ranger, he hissed at me. Despite our not so stellar introduction, I agreed to take him on a trial basis. Maine Coon Cats are supposed to bond with their owners, to love being around people, and to be affectionate, mellow pets. He was just beautiful. I managed to drive home with him protesting loudly all the way, then I put him in my bedroom to separate him from the other pets.
The first night was tough. Ranger had been behind my chair all day, but apparently he decided to try to make a break for it during the night. He pounded on the door, almost lifting me out of bed. He sliced through the darkness with an eerie, banshee wail the like of which I’ve never heard.  He alternated between pounding and wailing all night. The next night I put a stool next to the door, no pounding, and the wailing stopped the following evening.

Ranger was not eating. I was pretty worried. I even tried tuna. He would only come out from behind the chair to hiss at me and bare his teeth. Think of a little house cat doing that. Now think of a tiger roaring. Ranger is somewhere in between.  He jumped up once and rang my bell he slapped me so hard, then another time he scratched me on the eyebrow, frighteningly close to my eye.


When I would try to pet him, he would indulge me once, then swipe at me. None of the telltale ear, eye, or tail movements with which I was familiar precipitated his attacks. When I ignored him or didn’t pet him, he also attacked, weaving in and out of my legs like he wanted to be petted, then, slash. My hands and legs (He was a real ninja when it came to sneak attacks), are covered with scratches. But, I continued to talk to him in a calm, reassuring voice.I sat with him while working on my laptop during the day.  The times I could pet him increased. He started eating.  Two days ago, when I was taking a nap, he jumped up to lie beside me for about ten minutes. Last night, he slept beside me for the entire night. He lets me pet him and he loves to follow me around.

Tonight, as I’m writing this on my laptop in bed, he’s lying right beside me. As I paused in my typing, he laid his head on my arm and gazed at me adoringly. Then, he closed his eyes and purred himself to sleep. Ranger Danger no more. 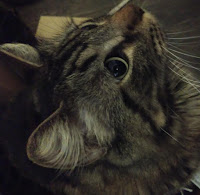