July - A Salute to Ernest Hemingway

When anyone mentions novels such as A Farewell to Arms and For Whom the Bell Tolls, you immediately think of Ernest Hemingway. Often known as one of the great American 20th Century novelists, he was born on July 21, 1899,  in Cicero (now called Oak Park), Illinois.

Hemingway served in World War I and worked in journalism before publishing his story collection, In Our Time.

In 1953, he won Pultizer Prize for The Old Man and the Sea; and 1954, he was awarded the Nobel Prize for Literature. The Sun Also Rises is another of his well-known works.

Because he began as a writer of short stories, Hemingway developed what he called the Iceberg Theory for writing where facts float above the water and the supporting structure and symbolism operate out of sight. The theory involves pruning language and is often referred to as the “theory of omission” allowing the reader to draw his own images and conclusions about certain aspects of the story.

However, Hemingway’s life could best be described as one full of drama, debts, and many mishaps, accidents and injuries. He traveled widely and was married four times.
Sadly, he suffered from bouts of mental illness and paranoia. He committed suicide on July 2, 1961, in Ketchum, Idaho. 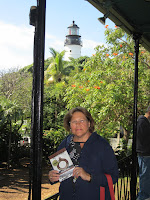 When I visited the Florida Keys a few years ago, I was able to tour his home where he lived and wrote during the 1930s. He has his own writing area above the carriage house as you can see in the pictures. Enjoy!