The End of an Era - Royals of Solana

As excited as I am about the release of my latest novel, Crown of Solana, I’m also a little 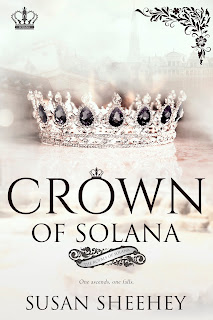 It’s the last novel in the Royals of Solana series, and the end of an era.
Five years of hard work, and countless arguments with these characters in my brain, and the culmination is finally here.

Crown of Solana releases May 19th (for Kindle, May 22nd everywhere else), the same weekend I’m attending Wanderlustin Dallas. I pray that readers love the ending and find the climax fulfilling.
For those who haven’t read the novels yet, I hope they are willing to pick up the first in the series, knowing that they don’t have to wait for the sequels to release.
This series has been down a very rocky road for me, including getting the rights back from the first publisher, to re-release with a new publisher. But the finale has never been released, and my anxiety is sky high as to how readers will take it.
Nevertheless, I’m thrilled these characters finally have their HEA’s.
I’ve moved on to a new series that has me completely enthralled, but I won’t be releasing the first one until at least three are ready to go (at least five in this series). Maybe in a box set, not sure.

Will any of you be attending Wanderlust in Dallas this year? If so, drop by and see me!
If not, I'll be at Fresh Fiction's Boas n' Tiaras in Dallas next.

Crown of Solana ~ One Ascends, One Falls http://books2read.com/u/3yPwQn
Following the brutal siege on their island country of Solana, Prince Andre and his sister, Princess Alanna face the monumental struggles of rebuilding their country. With the line of ascension unclear between the two remaining royals, the country is divided between who should inherit the throne. From all corners of the world, eager enemies surround the Royal Family. Defending the security of their countrymen grows harder still when the monarchy is threatened with dissolution, compromising the very identity of their culture.
When Gemma refuses Prince Andre's love because of her obsession with vengeance, the struggles of saving his country seem insurmountable. He resorts to old demons to cope, only to find they no longer mask his pain.
Meanwhile, Princess Alanna relies on Flynn's strong and solid demeanor to support her in her country's tumultuous upheaval. But her savior isn't accustomed to being arm-candy without a real purpose.
Despite the promises of love and a future in tropical paradise, royal life isn't as happily-ever-after as fairy tales depict. Especially not when scandals plague the palace amid diplomatic chaos. When old enemies charge into the breach, the royals stand to lose more than their crown and legacy. 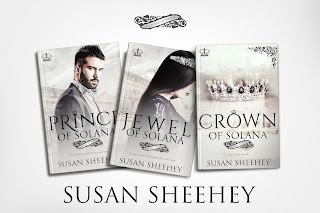 ~Royals of Solana ~
Royal life isn't all luxury, glamour, and celebrity status-- it's a target for relentless attacks from those who lust for power. The royals face vicious threats from both criminals and diplomats, all coveting the exotic prize that is their island nation. When the king and crown prince are brutally murdered during a cartel coup, Princess Alanna and exiled Prince Andre are forced on the run, desperate to save their own lives while trying to take back their country. Enemies emerge from all corners of the world, scrambling in the power vacuum. The last things the royal siblings need are limelight camera flashes, or steamy dalliances with common strangers. Except these strangers are impossible to ignore, and turn into would-be saviors.

By the way, I found this nifty site called Books2Read.com that compiles all retailers for one novel into 1 link! Amazon Kindle, iBooks, Nook, Kobo, and more...all of them! A God-send!

Susan Sheehey writes romantic suspense and contemporary romance. Water plays a crucial element in all of her novels, and she's a strong advocate for Autism awareness and acceptance. Forced to give up Diet Coke, she now survives on gallons of French Vanilla coffee. She lives and laughs in Texas with her husband and two boys. Follow her on SusanSheehey.com, Twitter, Facebook, Instagram, BookBub, and Pinterest.
Posted by SusieSheehey at 11:59 PM