A COWBOY TO KEEP

This month, I'd like to share the pre-order and June 1st release of an anthology I'm privileged to be in. This group of novellas, by seven USA Today and Award Winning authors, is called, A COWBOY TO KEEP, a Contemporary Western Romance Collection. I'm in love with this cover, the great stories, and wonderful group of authors! 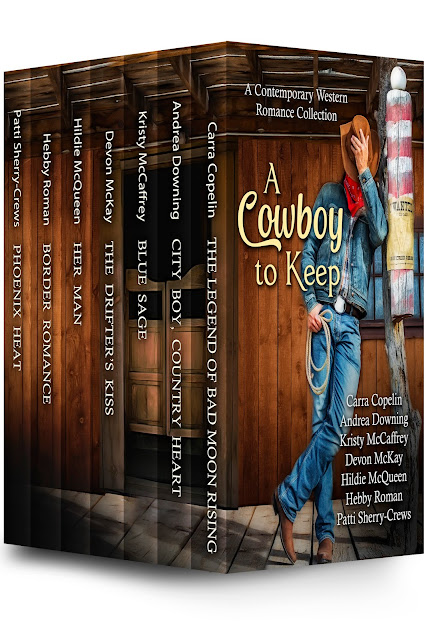 Read about the exciting stories that tell of romance, Cowboys, suspense, men in uniform, new adult, and second chance romance:

THE LEGEND OF BAD MOON RISING by Carra Copelin
Dinah Horne is in danger of losing herself. Leaving her friends and family for Dallas, Texas, she’s determined to make her mark. Unfortunately, the big city has other ideas. When her money runs out, she returns to her hometown and the man she can’t forget.

Ben Hammond is sheriff of the small community of McTiernan, Texas. Once he’s over the woman who stole his heart and shattered it, he decides to buy the Hard Luck Ranch and settle down. Problem is, odd things are happening that may be tied to the previous owners. As he begins his investigation into the past, he is faced with an even bigger problem—the reappearance of Dinah Horne.

CITY BOY, COUNTRY HEART by Andrea Downing
Rodeo star and rancher Chay Ridgway has left Wyoming to follow his girlfriend, K.C. Daniels, to New York. Leaving behind all he knows for a small bite of the Big Apple, Chay discovers the canyons of city streets may be too claustrophobic for this cowboy, especially when the trauma is compounded by the fact K.C.’s parents dislike him, their housemate is a harridan, friends are few, and the only job he can get is rounding up dinner plates.

As K.C. continues her two years of study for her Master’s degree, can she also keep a rein on Chay’s heart? Will this cowboy become a city boy, or will the wide-open spaces of Wyoming call his country heart home?

BLUE SAGE by Kristy McCaffrey
Braden Delaney has taken over the family cattle business after the death of his father, but faced with difficult financial decisions he contemplates selling a portion of the massive Delaney ranch holdings known as Whisper Rock, a place of unusual occurrences. The sudden appearance of a pretty relic-hunter while he’s collecting his livestock, however, is about to change his mind.

Archaeologist Audrey Driggs arrives in the remote wilderness of Northern Arizona searching for clues to a life-altering experience from her childhood. When she rolls off a mountain and lands at the feet of rugged cowboy Braden Delaney, it’s clear she needs his knowledge of the area to complete her quest. But if she tells him the truth, will he think she’s crazy?

Together, they’ll uncover a long-lost secret.

THE DRIFTER’S KISS by Devon McKay
Addison Reed doesn’t want to believe her foreman and family friend is responsible for her missing stock, but the man isn’t making it easy. Hoping to prove he’s innocent, she follows him into a seedy bar and finds herself in a bigger mess…kissing a complete stranger.

Drifter Sawyer Dawson never settled anywhere for long. In fact, landing a job on a ranch as the new foreman fell into his lap, and he figured Montana was as good a place as any to settle down for a while. Of course, sticking around might have something to do with a sexy blonde with an affinity for kissing cowboys.

HER MAN by Hildie McQueen
When someone is murdered, it's definitely not a normal week in the usually quiet town of Lovely, Montana.

With the sheriff gone, deputy Mark Hunter had planned for another slow week at work, but when the first murder in twenty years happens, his past as a city detective comes to life. It’s no time to fall in love.

The last twenty-four hours have been hell. Between a fight with her ex that left her with a bruised face and now finding a dead man, Eliza Brock can barely keep it together. But despite the mess, she still manages to feel an undeniable attraction to the handsome deputy, and damn if she can’t resist him when he knocks on her door.

BORDER ROMANCE by Hebby Roman
Leticia Villarreal is lonely. Widowed for eight years, she keeps busy with her ranch and charity work, but they don’t fill the empty place in her heart. When she considers establishing a Quarter horse racing stable, her new endeavor reunites her with an old acquaintance and exposes her horses to danger.

John Clay Laidlaw, a handsome, self-assured, millionaire rancher, has been attracted to Leticia since high school. When he was young and first divorced, he tried to get Leticia to date him, but she didn’t like his arrogant and high-handed ways. Separated from his second wife, John Clay offers to help Leticia with her new racing horse. Remembering how he acted when they were young, she doesn’t trust him. But when someone tries to harm her horses and John Clay rushes to her rescue, can she open her heart to him?

PHOENIX HEAT by Patti Sherry-Crews
Harper Donovan thought she had it all when she turned her dream into a reality—opening a restaurant in New York City. But when the venture fails and her fiancé leaves her, Harper has little choice but to return to her family in Arizona.

When she meets handsome firefighter and cowboy Frank Flynn, she decides it’s time to get in the dating game again. Except Flynn shows no interest and dodges her, but not before claiming they’ve met before. Solving the mystery of the complicated Flynn gets under Harper’s skin, making her even more determined to seduce him.

When the two finally come together, the smoldering passion ignites into a heat that rivals the Phoenix desert. Now that Flynn has opened his heart, can Harper handle this wounded cowboy who’s playing for keeps?

I hope you'll pick up this great collection of stories and give us a try.  They are on Amazon for the great price of 99 cents and also in Kindle Unlimited.

A COWBOY TO KEEP, A Contemporary Western Romance Collection