Caroline Clemmons subbing for Mary Adair, who is ill.

Back when our daughters were very young and Hero and I were trying for Super Mom and Super Dad, we strove to provide an environment that would foster their appreciation of fine things. I played classical music (okay, and some show tunes), we read to the children every day and made frequent trips to the library, and there were prints of well-known artists in their rooms. I hope we at least get credit for effort.

When Darling Daughter 2 was four, I was brushing her hair while she stared at the copy of Renoir’s Irene that hung on the wall of her room.

Darling Daughter 2 asked me, “Why do you think that girl has a blue fish in her hair?”

Ah, perception! I explained that it was a blue hair ribbon. There went my title of Super Mom. J By the way, whenever I see that painting/print, the ribbon has now become a blue fish to my eyes. 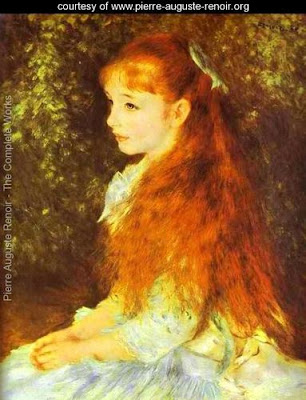 As a writer, I have to be wary of the same problem with readers. In other words, what I intend to convey isn’t always perceived in the way I expected. On a recent review of a historical romance, a reader/reviewer only gave me four stars instead of five because I used the words “cab” and “vehicle” and she thought they were anachronisms.

What? “Cab” is from the word “cabriolet”, the type carriage usually used for hire. “Vehicle” has been used for hundreds of years. Apparently the reviewer thought of modern yellow cabs and motorized vehicles. Even though the words I used were correct for the time period, the reader’s perception was not what I expected.

Historical writers are unable to use some expressions that were used in the time period, but have become contemporary catch phrases. For instance, “fantastic”, which now is often used alone and drawn out, must be used carefully. I’m sure you can think of many other phrases or words that apply.

Contemporary writers are challenged to sound "current". There are too many words that have come to have a different meaning recently. After writing historical romances for so long, this is a challenge for me. Fortunately, our daughters are my first beta readers and they nail me on these words.

Writers are challenged not only to write our stories, but to do so while consciously avoiding anything that might be misinterpreted or perceived incorrectly. You can see that this is an impossible task, yet we work hard tilting at these word windmills. When writing a historical romance, I work hard to avoid any anachronisms. When writing a contemporary, I want to avoid sounding “old-fashioned” and/or use words that now mean something entirely different than ten years ago. What a reader comprehends depends on background, state of mind, and other factors over which writers have no control.

My latest releases are RACHEL, Bride Brigade Book 5, and MURDOCH’S BRIDE. RACHEL is set in 1873 Texas and Murdoch's Bride is set in 1887 Montana Territory.

Here's a sneak peek at my next release's cover. On March 27, BRIDE’S ADVENTURE will be released, with the heroine (Amelia) introduced as a secondary character in MURDOCH’S BRIDE.

But I'll also be releasing a contemporary, GRANT ME THE MOON, as a part of my Texas Caprock Tales series.

Thanks for stopping by!
Posted by Caroline Clemmons at 6:35 AM