The Season for Family Traditions is Here - Are You Ready?

We all have family traditions. Some we develop with new families, some are carried down through the generations. In November 1621, after the Pilgrims’ first corn harvest proved successful, Governor William Bradford organized a celebratory feast and invited a group of the fledgling colony’s Native American allies, including the Wampanoag chief Massasoit. Such was the first Thanksgiving, although it's doubtful they called it that.

This week we began planning our own Thanksgiving dinner. We lean toward a more Southern menu, I think. Starting with the oven roasted turkey, we add ham, mashed potatoes, sweet potatoes, peas, green bean casserole, cranberry sauce, giblet gravy and dressing -- not stuffing -- cornbread dressing. Dessert includes pumpkin, chocolate, and pecan pies. In the last few years, my daughter has been making cheesecakes that would give any one's efforts a run for their money. This year she's making plain and a pecan and chocolate combination that sounds sinful.

All of our immediate family will be going to my niece's house, including our daughter and her husband, our son and his wife and our three grandchildren, two nieces and husbands, and my sister-in-law. Each family will bring a dish. The atmosphere will be chaotic and tremendous fun. Family.

Usually on the day after, when everyone has gone home and my husband has left for the deer lease, I begin decorating for Christmas. Putting up the tree and all the decorations usually takes about a week. It seems I'm always finding additional trinkets to put out. Thankfully a few years ago we bought a pre-lit tree. Best decision we've made in a long time.

I'm fairly certain that our family traditions, including the decorated tree, started, at least, as far back as the late 1700's to early 1800's. The trees through the years have come in all shapes and sizes. Growing up we had short ones, tall ones, fir, white plastic and a cedar that my dad cut for us late one night. It was such an adventure having daddy cut down our own tree, that is, until we saw the sign saying we were on land belonging to a state park! It was pretty and smelled wonderful.

My husband and I started our family's tree tradition with a Lionel train set, and a town consisting of a farm house, train station and Santa with reindeer. While the placement and additions have changed throughout the last 40 years, it's content remains circa 1955. The Santa and Reindeer are from my husband's youth, and the farm house was made by his great-grandfather. Tradition. The following shots are from our tree last year. 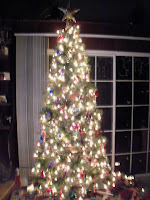 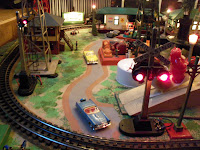 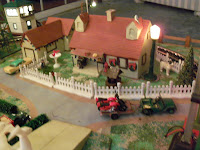 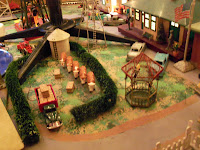 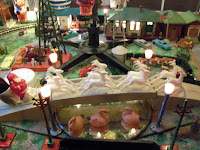 I'd like to share with you, now, my new short story on Amazon called, A BRIDE FOR CHRISTMAS. It takes place in San Antonio, Texas on the River Walk. 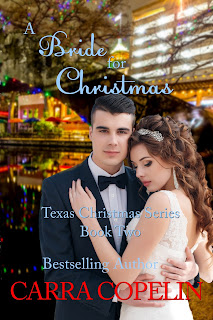 Lucy Martinez has dreamed of being a Christmas Bride ever since Special Forces Soldier, Jason Scott, popped the question. Jason has assured Lucy he will be at the altar to say I Do no matter what, but will a blizzard on Christmas Eve prevent him from making it home to keep his promise?
Available at Amazon

To celebrate the season, and for a chance to win some Amazon cheer, I have two $5 gift cards for comments on what your Thanksgiving plans and traditions are. Inquiring minds want to know!

Amazon Author Page
Posted by Carra Copelin at 4:00 AM