Domesticated Turkeys are too Fat by Paty Jager

Did you know that wild turkeys can fly but domesticated ones can't? Yep.

The domesticated turkeys have been bred to be heavier so they can't take off from the ground. The wild turkeys also can fly up to 55 miles per hour and can run 25 miles per hour. while all the fat domestic turkeys can do is waddle fast. Though, when I was a child, we had an old Tom turkey that would put me back in the house faster than you could say, Tom. I thought he was a pretty fast runner!

Wild turkeys make very little noise. They don't want to attract predators. The domesticated turkeys make lots of noise because the only thing they have to fear is Thanksgiving.

With all this turkey talk I thought I share a recipe that was taught to my mom by her best friend. Both of these wonderful talented women are no longer with us but I remember many a Saturday after Thanksgiving when they would be drinking wine, laughing, and preparing turkey enchiladas from the left over Thanksgiving turkey. The best part about this recipe is it's a fit all recipe. You use whatever amount of turkey you have and add the ingredients to give you a good blend.

Like I said above you make as much as you have turkey for, or you want. I would say one cup of meat would make about four enchiladas.

Shred the turkey into a large bowl. Add one to two chopped onion depending on how much turkey you have. Add one to two cans of chopped olives. After the three ingredients are mixed, add one to three cups of shredded cheese. This depends on how cheesy you like them and how far you need the meat to go.

Warm the enchilada sauce in a frying pan. Dip a corn tortilla in the sauce, place in a glass baking dish, add a 1/3 cup of the turkey mix and roll up, sliding to the back of the dish. Do this until you have filled the dish. Pour the remaining warm enchilada sauce over the top of the rolled up tortillas.

Place in oven at 375 degrees and back for 30-45 minutes or until the sauce is bubbly.  Enjoy with sour cream and guacamole.

That is the tip of my hat to Thanksgiving.

I have a Christmas mystery releasing Nov. 15th, but you can pre-order it now. 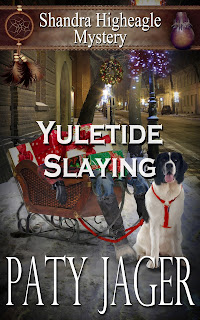 Family, Revenge, Murder
When Shandra Higheagle’s dog brings her a dead body in a sleigh full of presents, her world is turned upside down. The man is a John Doe and within twenty-four hours another body is found.


Photos: Terri Norman Lockwood Cole and me
Posted by Paty Jager at 12:01 AM