There's Always Something Special About Your First

We all have memories of a lot of firsts in our lives. Our first bra; we were growing up! Our first kiss: two guppies smacking lips. Our first pregnancy; ugh, the morning sickness. Our first homemade Thanksgiving turkey...you mean we had to thaw it first??? Please tell me I'm not the only dummy out there. And, for writers, our first published book.

Mine was a contemporary western, STORM'S INTERLUDE, that released with The Wild Rose Press five years ago. I was overjoyed. I'd dreamed of being published since I was in the sixth grade back in the day when we were crawling under our desks for bomb protection during the era of the Cold War. So we're talking about dreaming for something for a lo-o-o-ong time.

Since then, I've moved on to HarperImpulse and Random House Loveswept with 16 more books. Number 17 is due out the end of November. I've gotten the rights back to 3 books with Wild Rose and entered the world of self-publishing. My first self-pubbed book? STORM'S INTERLUDE, of course. After all, there's always something special about your first book. It's the culmination of years of wishing and the story is embedded deeply within your heart.

The original version earned the HOLT Medallion of Merit for best romance and best book by a Virginia author. It was also voted book of the year at Long and Short Reviews the year it came out. For a writer who had so much to learn, all the accolades were quite humbling. I didn't think anyone would like it or the way I'd written it or my characters or.....self-doubt is an awful thing, isn't it?

So my first Indie book is standing tall and proud in the back of the pack of so many others, but I'm hoping Storm and Rachel will win some more hearts. It's now the first book of a planned series "Rosefire, Texas Romances." 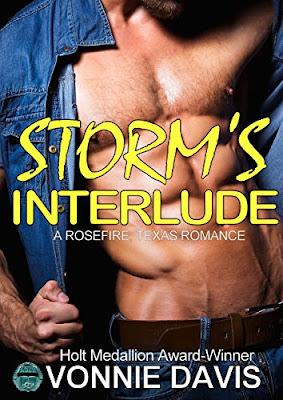 Nurse Rachel Dennison comes to Texas determined to prepare her new patient for a second round of chemo. What she isn't counting on is her patient's twin brother, Storm Blackhawk. Despite her initial attraction, Storm has two things Rachel can't abide: a domineering personality and an ex-fiancée who won't leave him alone.

Half Native American, with the ability to have "vision dreams," Storm dreams about Rachel for three nights before her arrival. Both are unprepared for the firestorm of emotions their first encounter ignites. Ultimately, it is Rachel's past--an abusive, maniacal ex-boyfriend--that threatens to keep them apart...and Storm's dreams that brings them together again.