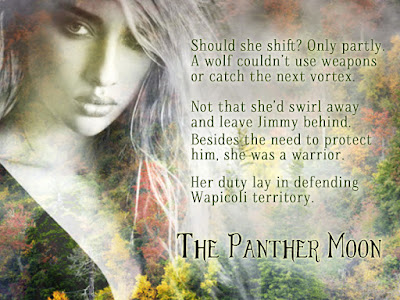 I never thought I’d ask myself that question as I’m working on a story, but the creative pursuit of what might be has taken me on some amazing and unexpected writing journeys. If anyone had told me several years ago that I would create a Young Adult fantasy romance series with wolf shifters and other fantastical creatures and characters, I would’ve been mightily surprised. I began fiction writing in solid historical romance. Then ghosts appeared, and ‘The door to nowhere' opened--a portal in time--and a bearwalking Shawnee Warrior growled to life. Add some magic, a dash of fantasy, and the next thing I know, I'm on the engrossing path to Wapicoli Lodge. Given all of this, I must admit the seeds of The Secret Warrior Series were sown long before I undertook this supernatural adventure.
These writing journeys remind me of the wonderful quote from The Lord of the Rings: “It's a dangerous business, Frodo, going out your door. You step onto the road, and if you don't keep your feet, there's no knowing where you might be swept off to.” ― J.R.R. Tolkien
I never know where I may be swept off to in my imagination. Undertaking a new series in a new genre is definitely a potentially dangerous business. I've entered uncharted territory. Whether or not this series meets with approval, I have loved every step of the journey. If you enjoy the stories, please leave them a kind review, and yes, you need to read them in order.
I can't share The Panther Moon, book 3 in The Secret Warrior Series, without touching on the series itself, and the whys behind it. Passion, knowledge, and various influences lie at the heart of these stories. My love of history, mystery, fantasy, and fascination with the mountain people and Native Americans ignited a wildfire of ideas. Some episodes of Monster Quest drew my attention to how many supposed creatures inhabit the Alleghenies--including werewolves and space aliens. The TV show Grimm explores the hidden world among us...These all deepened my pondering. 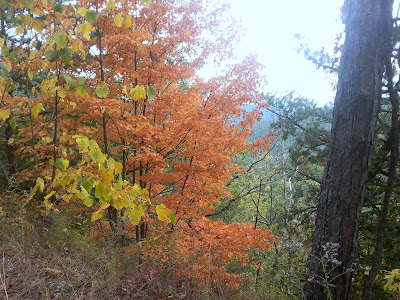 On an autumn drive into the Allegheny Mountains (pictured above from that trek), it struck me how easily anything could hide in these rugged ridges. And Fort Valley, called Hidden Valley in the series, is tucked in the Massanutten Mountain Range, truly off the beaten path. Getting back there involved the most hair-raising drive over a mountain I've ever experienced--depicted in the beginning of The Hunter's Moon (Book 1). The ascent is so steep, I was certain our pickup would flip over backwards. The curves are also a nightmare. But it was an inspiring trek, one I never would have written the story without. Those of you who fear the wilderness is disappearing, it's still out there. Trust me.
Living in the Shenandoah Valley of Virginia surrounded by mountains veiled in mist and mystery was perfect creating the characters and setting for this series. Some characters are based on lore I've learned over the years—lore some folk swear is true. Others appeared to me, as characters have a way of doing. Out of the mist. Even though the series is fantasy, a great deal of research went into it. Everything I write, whether fantasy, paranormal, time travel, or straight historical, has its roots in the well-researched past.
In The Hunter’s Moon, 17-year-old Morgan Daniel begins this journey much as I did, in ignorance. She must learn about the strange world she’s entered, and the bizarre, but vital, role she’s destined to play. The meeting between her and alpha shifter Jackson Wapicoli sets off sparks, but when the curse she’s lived her entire life unaware of is revealed, the learning curve is mind-blowing. Good thing Morgan has guts and a lot of support. And then there's the prophecy...
The Panther Moon is in pre-order now, out on the 30th. The story will be available in kindle and print at Amazon, and in eBook from all major online booksellers. 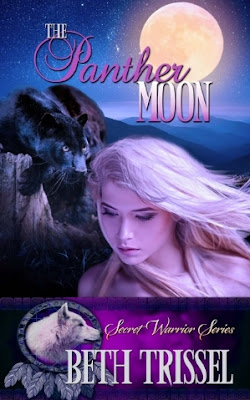 Story Blurb:
Being the seventh Morcant has its perks: Morgan is learning to fly and wield magical blue fire.

But the coyote shifters are growing bolder. Mateo and his panthers seem impossible to defeat. And vampires aren't real – are they?

When the elusive and enigmatic Chief Okema disappears and the wards protecting the Wapicoli territory falter, Morgan and Jackson are forced into the role of leaders. Badly outnumbered and outgunned, do they have time to search for the secret of the Divining Tree, and will it help them in the final battle?
Kindle Link: https://www.amazon.com/Panther-Moon-Secret-Warrior-ebook/dp/B01JXZG1SC


The Panther Moon (The Secret Warrior Series) is on a book blog tour with prizes. It runs through the 30th. The link for the tour is: http://www.itchingforbooks.com/2016/09/blog-tour-giveawaythe-panther-moon-by.html