FAITH AND THE TEXAS LAWYER, A Brides of Texas Code Series, Novella, Book 4

I've had this romance story in my head and heart since I visited Dallas' Heritage Park many years ago. There are old homes, churches, and examples of the city and life of yesteryear. Touring one of the homes, a Time-Travel story began growing in my head and finally, this year, it worked its way onto the page.
When the setting took me to Galveston, Texas in 1900, the only logical thing was to include the hurricane of 1900. There hasn't been a natural disaster in the United States as devastating as 'Isaac's Storm' since. The island was nearly leveled from 140 MPH winds and a 15 ft storm surge. Over 6,000 lives were lost.
I enjoyed writing Faith and the Texas Lawyer and think it's the best book I've written to date. I hope you like it.

Faith Daniels has had a hard time fitting in all her life, from the time she was left on the steps of a firehouse to her recent divorce. The only time she feels connected is when she rehabs old houses. Often she wishes she could have experienced life in a simpler time. Her current project, a 1900 Galveston mansion, is all she ever wished for and more. When some mysterious force transports her from 2016 to 1900, just prior to the most devastating natural disaster on record, will Faith give up all she has attained in her present life to stay in the past with the sexy turn-of-the- century lawyer?

Joseph Benning has serious trust issues. He is still recovering from the jolt of being dumped by his fiancé shortly before their wedding. In order to prove to himself he can manage on his own without a woman in his life, he decides to reach outside of his routine and buy a house. Suddenly, a strange woman shows up inside his house telling fantastic stories of disaster and destruction. Will Joe be able to make the right decision and let her go, when it comes time to save her life?

Faith took a minute to reason through what he’d said. Even though she was essentially in her underwear and, except for the slit in the seat of her drawers, she was far better covered than when she wore her bikini to Lake Ray Hubbard. One other reason finally made up her mind.
“Well . . . “she said, smiling and reaching for the corset. “Okay, I’ll accept your offer of assistance, but only because I really want to wear your sister’s beautiful dress.”
“Thank goodness, that’s settled. Come over here.” Joe took her hand and led her to the foot of the bed. “Now put the corset over your head and hold on to the post.”
She followed him, and then did as he instructed. Standing at the foot of the four-poster bed, she grasped a post with both hands. One of his hands held the ties of the corset at her waist, while the other pulled and tugged the laces tighter drawing the two back sides closer together.
Her mind immediately went to the disaster movie about the Titanic, where Rose’s mother laced her up, while giving her the tongue lashing of her life. A very unsettling moment for Rose. Faith’s own experience, however, was unsettling for a vastly different reason.


Each time his fingers slipped between the crisscrossed cords and her chemise, she had the sensation of being scorched. She closed her eyes and imagined his hands touching her bare skin. Heat concentrated and moisture pooled in places she’d forgotten about in recent months. This was without a doubt, one of the most erotic moments she’d ever had.
Joe's hands stilled at her waist, and then bracketed her upper arms. He pulled her to him, lowered his head and kissed her neck just below her ear.
“You smell good.”
“Umm,” Faith crooned, leaning her head to the left to give him better access. “I found a bar of lavender soap in the trunk.”
“It’s more than little purple flowers,” he breathed the words against her temple as his left hand traveled up her neck to clutch a handful of her hair. “You smell down-to-earth, sensible, and exotic. You smell like . . . woman.”
“Wow, you not only kiss like nobody’s business, you talk real nice, too.” 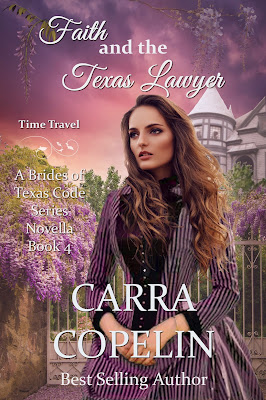 I hope you'll give this Time-Travel Romance a try. I think you'll like it! She's at Amazon for $2.99 or FREE in Kindle Unlimited.
Amazon

Hugs to all,
Carra