Moving Is Not For The Faint of Heart by Suzanne Rossi

As many of you know from my past blogs, the hubster and I sold our home in Ft. Lauderdale, Florida, and moved to Germantown, Tennessee, to be near my youngest son and his family. We'd lived in Florida for almost twenty years. During that time we managed to accumulate a lot of--well, junk. I thought we'd done a good job of weeding out the unnecessary stuff until the movers actually showed up to pack. It took them two days. This should have been an indication of what was to come.

I don't know how it happened, but we misread our closing date as August 27th. It was listed as August 29th. In the meantime, we contracted with the moving company to load the truck and leave on August 26th. Oh well, we were driving so it didn't seem like a big deal. We could take our time. Sounded logical to me. The residents of our new home then asked for an extension on them vacating the house due to their jobs--she's a teacher and he's a firefighter. We said okay and agreed to take possession not at the time of closing (August 31st, a Wednesday) and delay it to Saturday, September 3rd. A couple of extra nights in a motel wouldn't kill us.

My husband contacted the moving company with the change of off-loading dates. The company came back with the news that since that was a holiday weekend (Labor Day), the driver wouldn't be able to leave Florida until September 6th with delivery on September 8th. That meant we had to spend close to two weeks in a motel. Let me just say that eating out is not on our agenda for a while.

Glad to say the van arrived and was off-loaded in less than four hours. Now, I had to unpack all those boxes. Enter my daughter-in-law. There is something metabolically wrong with the woman. She can only work for ten hours at a crack before calling it quits. I was whining and whimpering after four. My back hurt, I was tired, and up to my knees in a sea of packing paper. Somewhere in the world major deforestation occurred. Those packers used more paper than I even knew existed. I guess there was a method in their madness because nothing ended up broken, which is more than I can say for me. Last week I bent over to unpack a box when my lower back seized. I have since gulped Aleve and now have a close relationship with a heating pad.

On the plus side, most of what we need is unpacked and in place. Everything else can wait a while.

My advice? Move every three or four years. Less stress and a lot less junk to pack.

I have also come to the conclusion that this is our last home. My next move will be to either the assisted living facility or the funeral home.

As you read this I will be in Atlanta for the Georgia Romance Writers Moonlight & Magnolias Conference. My book, The Good Twin, was selected as a finalist in the Single Title category of the Maggie's Contest. I'm very honored to have finaled. I was planning on attending this year anyway, so maybe it's a sign of good news to come. 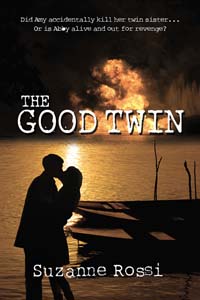 Hope you all are easing into Fall. I'm looking forward to experiencing four seasons again and can't wait for Thanksgiving and Christmas this year. I'll be around family for both holidays for the first time in five years.

Have a great day and I'll be back next month with more of my adventures.