I love Independence Day, the picnics with family, and the ooohs and aaahs of the fireworks.  The 4th of July was the most celebrated holiday in the Old West for two reasons: 1) the weather is better in July than December; and 2) Christmas wasn't so commercialized in the 1800s. 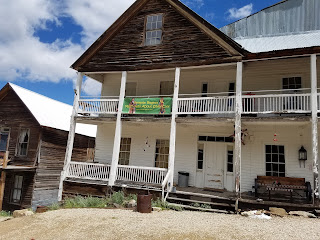 This is a good day to remember our heritage and our history.  Of course, some of us are obsessed with days of yore anyway, but we'll ignore that.  One place that celebrates the actual Old West--life in the latter half of the 1800s, is Silver City, Idaho.  Very few boom towns survived to the 20th Century because most burned to the ground.  Those that were left either withered and died, or became tourist towns (e.g., Deadwood and Virginia City, Nevada).

Silver City did neither.  The citizens decided to restore the buildings as best they could (they get no funding for this--most have to work in the valley to be able to afford the restoration and upkeep).  It's a labor of love, emphasis on the word labor.  Old buildings are not easy to maintain, and if they need a plumber, well, the nearest plumber is two hours away, so everything costs considerably more than would in a normal suburban house.

The town has no electricity, but does have running water.  Many of the homeowners live there in the summer but these days, the road to Silver is closed from November to May, so only the winter watchman lives in town during those months.


The citizens of Silver City decided to let the other towns have the tourist attractions--but they wanted to preserve the city as it was in its glory.  Speaking of Old Glory, the flag has a huge role in Silver City life.  If a house has a flag displayed, then the residents are home and receiving visitors.  If no flag, don't bother to knock.  Same goes for businesses.  If the flag is out, the store is open.

The flag was out at the Idaho Hotel June 17 - 19!  The entire hotel and everything in it is a museum, really.  You can spend hours looking at all the artifacts, and the owners can tell you just about anything about each one.  Truly amazing to stay in a place like that.  Each room has 19th Century artifacts collected from town as well. 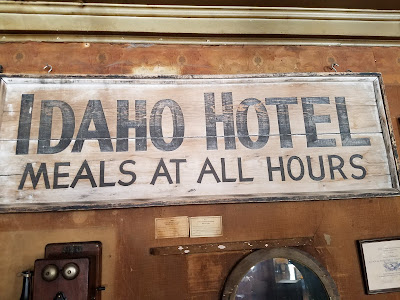 We had quite a party at the hotel.  In fact, we filled all thirteen rooms, and kept Jerri Nelson (hotel co-owner) hopping for all the pies we ate.  That woman really knows how to make pie, let me tell you.  Or let Shirl Deems tell you.  I think she had a slice of every kind--took her all weekend but she's tenacious.

The music was awesome!  The program starred Daria Paxton and her dad, Matt Paxton.  They even managed to get her mom, Brenda Paxton, to play the accordion occasionally.

We also had a melodrama.  It was really silly and every single one of us messed up our lines, but we had a great time and the audience (which included walk-in patrons who weren't part of our group) loved it, so I guess it was so horribly bad that everyone thought it was great.  That must be in the "if you can't sing good, sing loud" category.  You can see the video in two parts on my facebook page in the next few days (a friend posted it but didn't mark it public).  You can also see it at the Pickle Barrel.

In the afternoon, we had a multi-author booksigning.  USA Today Bestselling Author Ann Charles dropped in to say hi to Honey Beaulieu.  Ann partied all day and signed books in the afternoon.

Chelle Gluch took us all over the area.  She's an incredible tour guide.  We learned about the surrounding boom towns that are no more than foundations now, and also toured the cemeteries.  Jim Hyslop, a Silver City resident, gave a nice talk on the history of the town.  Dave Wilper took us all to church--he let us in and gave us a 30-minute talk on the history of the beautiful Our Lady of Tears Catholic Church.

The staff of the Idaho Hotel was incredible.  We had the place absolutely full but they kept everything humming along perfectly.  Everyone, and I mean everyone, should stay there at least once.  No, the road isn't that bad--just a little bump here and there, and two cars can even pass by each other on most of it.  But back to the staff.  They served above and beyond the call of duty, or even the call of Honey Beaulieu.


We all love history and we celebrate the birth of our nation today.  All week, in fact.  The Great American Western Romance Week is here at Hart's Romance Pulse, July 3 to 9.  Check it out to find new books, enter to win prizes, and just generally have a good time.  Look for my post on this site July 6. 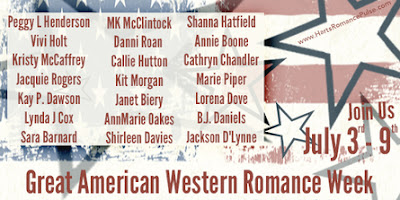 Romancing The West | Pickle Barrel Bar and Books
Posted by Jacquie Rogers at 7:02 AM