While you read, do you listen to music?
I listen to music while I write. I create playlists and radio stations for each novel. I jot down the major songs that really stick with me.
For those readers who enjoy it, I try to share those playlists soon after the book is released. Just another fun way for readers to connect to the characters. By no means is this a way of endorsing a particular music artist or album, but just trying to add to the experience of the story and characters.
As a reader, do you appreciate when authors share their playlists?
A quick search on YouTube for popular book series reveals there are literally hundreds of custom playlists created by readers and fans. Crossfire Series for Sylvia Day, the Twilight series for Stephanie Meyer, and The Iron Fey series from Julie Kagawa all have fan-inspired playlists.
I’ve always enjoyed it when the authors I love create one for their novels. I feel like I connect to their tone/theme better.

For Prince of Solana, there were several songs that really struck a chord with me while I wrote. 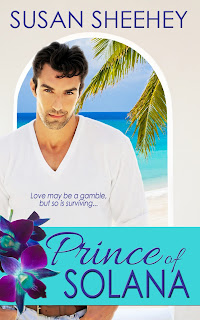 I incorporated those into my own personal playlist. Feel free to listen and enjoy!


Chapter 38 – Kissing by Bliss
Posted by SusieSheehey at 8:00 AM