DESIRED, Book 1 of Miranda's Chronicles is finally loaded onto Amazon and will be officially for sale on August 4th.

It can be pre-ordered for a limited time for 99-cents at Amazon.  So far, it's garnered two 4-star reviews from reviewers at Net Galley. 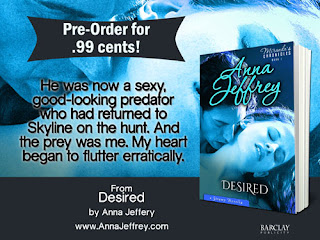 I think I've posted the blurb before, but here it is again:

Miranda March wears her extraordinary beauty like a mask to conceal her emotional vulnerability. A successful small businesswoman, she might appear to be in control of her universe, but ever in the back of her mind is the one thing that can yank the rug out from under her at any moment: Her mother who suffers from mental illness.

Enter handsome, sensual—and rich—Harvey (Tack) Tackett, a friend of a friend, in town overnight on business. The instant they meet, Miranda feels a connection that stirs her to break one of the rules she lives by—no foolish flings with men passing in the night. After a night of passionate lovemaking like she’s never known, profound emotions emerge. She believes the feeling is mutual. But Tack leaves town without so much as a call and she hears no more from him. As she struggles to overcome her disappointment, she learns her mother has sunk into a depression that calls for immediate attention. Miranda has no choice but to move Mom in to live with her. Her life will never be the same.

From out of the blue, Tack reappears. But it’s too late. Miranda is committed to her duty to her mother. Trying to have a romantic relationship with Tack or any man would be as hard as mixing oil and water. She has already tried and failed at that. Can she solve the conundrum and find a happy-ever-after with Tack?


The mental illness from which Miranda's mother suffers is bipolar disorder and alcoholism. I don't delve into it deeply because it's a short book and I'm no expert on mental illness. Although I have known a couple of people personally who have had this affliction. I've seen first-hand that not only is it hard on the sufferer, it's hard on everyone around him/her.

It was a fun book to write. It's only a little fewer than 40,000 words. Compared to the tomes I've written in the past, it's a diary entry. It's also a little steamier than the books I've previously written, but no doubt there are those who might not see much difference. LOL

Let me know what you think....