The book is finished. Big sigh of relief/joy/angst/sorrow/satisfaction!

Not so fast! Then comes the time when many writers cringe-- promotion. I am sure there are writers where promotion is pleasurable. However, for others, it's like pulling teeth—you know it has to be done, but you don’t like doing it.

I didn't find a definitive answer for how many eBooks are on Amazon but some suggest as many as 5 million. For any new book, the easiest thing to happen is dropping into Amazon's black hole and staying there. Avoiding that fate involves not just the quality of the book but of its promotion. Promotion begins with a cover, title and blurb—not necessarily in that order.

For my fifth Arizona historical, the title search was complicated by needing it to feel right for the series, stay true to its own story, and work with the next two books. For weeks, I'd go to sleep and wake up thinking of word combinations. When finally I had that eureka moment, it seemed so obvious that I wondered why I'd never seen it before. The realization was helped by having found the cover image first. Images inspire words. In this case, I got lucky with the expressions on their faces where she is going within for dreams and meaning, while he's looking out into the world for the danger he is expecting.

So many things happen in a novel. How does one compress them in a few paragraphs for the blurb? I found no way to mention that the story brings back Arizona Sunset's Rykers, as secondary characters. Abby and Sam are among my favorite characters; so having them along with their offspring was fun for me as a writer. There was a problem though. Whenever Sam Ryker is in a book, he tends to take it over-- luckily the powerful and complex Vince Taggert is up to the challenge.

Sticking to the two main characters for the blurb, I worked for another week or more with words that always ended up feeling pedestrian. It was not until I was putting together the back cover, that the image of the couple revealed the crux of their problem. The past was haunting them both but in different ways.

Blurb for Echoes from the Past

They had absolutely no reason to be together, nothing in common-- except, oh maybe a few past lives where the passion was sizzling. There was a minor complication—he always ended up dead. Pure coincidence. Couldn’t happen again. Her fear that it could led her to try to convince him not to come with her on a potentially dangerous archaeological investigation to Central Arizona, a place where one of those lives had been haunting her dreams since she was thirteen.

He knew, given his experiences, there were many ways a man could end up dead, and he wasn’t about to worry about dreams with no real bullets. He did know, however, that she could prove dangerous to him. He had never walked away from danger before and wasn’t about to now.

1901, a new century and things should be less wild and woolly in Arizona. Very civilized, with only an occasional nightly shootout. Much safer—for some. Not so much for the son of an infamous outlaw family, who was falling in love with the one woman from whom he should have stayed many miles away. Shoulds weren’t in his vocabulary.

This western adventure takes two unlikely lovers from Tucson, north into the Sierra Ancha, where answers and danger await. As the fifth Arizona historical, long-time readers will find some familiar characters. This is the first romance for the Taggert brothers-- Vince, Jesse, and Cole.

Posters are another way to promote books and show the connection when they are in a series. Although the next three Arizona historicals books will be sharing some secondary characters, as well as settings, they can be read alone. There are no cliff hangers. 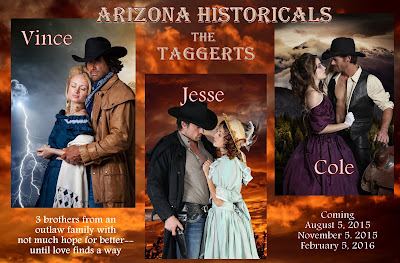