SHORT STORY, EPIC SAGA OR SOMEWHERE IN BETWEEN - WHAT'S YOUR PLEASURE?

Back in the Seventies, Eighties and Nineties most writers felt that the longer a story was the better the book. Most titles, especially in Romance topped out at 100,000 to 125,000 or beyond. I don't know if we had more time to devote to large novels back then or what, but, oh my gosh, as slow as I read today, I'd never finish a book!

When I started writing in the mid to late nineties shorter books were becoming more popular. Different lines were introduced like from Silhouette there were Desires, Intimate Moments, Special Edition, and Intrigue. Harlequin had their own lines, as well. It seemed to me that life was more busy and chaotic than ever before, yet suddenly, I could finish a book in a day or two. Not the standard two to three weeks or longer.

Today I feel we as readers prefer a well written shorter book to sink our teeth into. We want a story that pulls us in, carries us away, but drops us back into the demanding day-to-day ready to pick up another. Below are books from three of my favorite authors, each selection being from a series created by these authors. These are of the shorter novel length and, I believe, are representative of the size book readers are looking for. From L to R, Kincaid Series, Falcon Series, and Running Series.

This shorter length is what I like to read and write. My novel, CODE OF HONOR, Texas Code Series, Book One is 62,000 words and, in my opinion, a good length to get the story told. 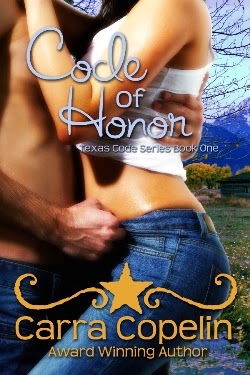 Graeme pushed onto the porch to find Maggie held in Riordon's arms. Oh hell no! With the speed of a raptor, he reached Riordon, stopping short of taking the man out with a punch to his face. His anger teetered closer to the edge when he looked into the asshole's shit-eating grin.
Maggie intervened. "Graeme, please calm down. And you," she said glaring her displeasure and jabbing her finger into Riordon's chest. "Go. Now."
"Okay, beautiful." Riordon chuckled. "I'm leaving." With a taunting glance toward Graeme, he lifted her chin and covered her mouth in a kiss, stopping abruptly when his collar whizzed past his ears.
"Get the hell away from her," Graeme growled holding on tightly to the wad of shirt in his fist. It gave him great satisfaction to see the slightly shorter man's heels lifted off the wood planks. Blistering heat infused his glare as he stared Riordon in the eye. "Don't ever touch her again, got it?"
"Message received." Riordon grinned and straightened the collar of his shirt. He laughed and, as he bounded down the steps toward his car, said, "Don't look now, but you've got it bad, my friend."
Maggie steadied herself against the porch railing and swiped at her mouth with the back of her hand. What just happened? What in the world had gotten into Trevor? He'd never done anything like that before. Maybe she overreacted, but she felt like he'd violated her and the trust between them.
She sensed rather than heard Graeme's presence beside her. His warmth and spicy scent tempted her to lean closer to him. An intrinsic need compounded by desire coursed so strongly, it nearly drew her off balance. She tightened her hold on the railing to keep from falling into his arms. Her tenuous grasp on reality, though barely recognizable, stopped her from making a fool of herself.
His hands lightly supported her upper arms. "Look, I –"
"I'm –" she said simultaneously. When he nodded, she continued, "I apologize for whatever that was just now."
"No, your life's none of my business."
"Trevor's never done or tried to do anything like that before. Truth be known, from the look on his face, I think he was trying to make you mad for some reason."
"Or jealous."
"Were you?"
"Hell, yes," he growled.
She offered no resistance when he pulled her to his chest. She wrapped her arms around his waist, sliding her hands up his tautly muscled back. She lifted her face to his meeting his lips in a kiss that stole her breath and all cognizant thought. There was something she'd intended to ask him, something . . . needing . . . clarification. Just then his hand slipped into the waistband of her jeans at the small of her back. Bells and whistles went off in her clouded brain or maybe they were Black Cats and sparklers. She couldn't tell.
One conscious thought did wheedle its way in between his tongue in her mouth and the feel of his fingers sliding farther down her backside. They were still outside, on the porch. When she managed to break contact, she murmured against his lips, "Inside."
He missed her meaning, for he maneuvered his free hand to the front of her jeans working to undo the snap and zipper.
"The house," she managed. "Inside the house."

So which type and length of book do you prefer? Contemporary or Historical, Fantasy or Young Adult? Short, Long or somewhere in the middle? Drop me a comment for inquiring minds want to
know.

Thanks for stopping by today and listening to me prattle on. I love your company!