Third Times' the Charm: The Clafouti That Almost Killed Me

Whew! Ever feel like life's a tornado and you're Dorothy? Sorry for the repost but I just moved and I'm in a snit because I can't find my toothbrush.

I, Bea Tifton, am a major dork. I know. I know. You see the witty, sophisticated fashionista and think, Oh, no, Bea, that can’t be true. But yes, Dear Readers, it is. And here is my story. 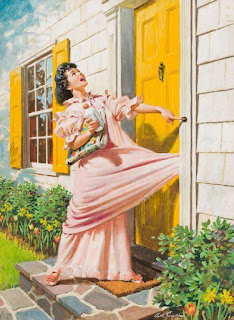 I’ve gotten so used to being, er, “Event Prone,” as my lovely and talented mother terms it, that it seems normal to me. But, as my favorite maternal cousin once said with a laugh, “Bea, stuff just happens to you.” Okay, she didn’t say “stuff.” Whether it’s forgetting to unfasten my seat belt, punching myself in the eye trying to change the toilet paper roll (don’t ask), or catching my purse strap on my storm door’s handle almost every time I go out, that’s just part of my daily routine. But recently, things took a surreal turn.
When the sheet to provide homemade breakfast items for an upcoming reception at church was sent around at my book club, I cheerfully signed up. 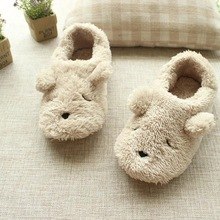 The night before, I put the fruit on to drain and set my alarm for dark thirty the following morning. The next day I hummed as I mixed, stirred, and baked. After extricating myself from the storm door, I carefully put my baking dish in the car and drove to church. Since it was so early, the organizer of the program promised she would have a person outside with a cart so we wouldn’t even have to get out of the car. I hadn’t slept much and I’d cut it pretty close, so I decided to do something I never do. I stayed in my pjs. No one would see me, right?

But when I got to the church, no one was waiting. Hmmm. It was just a minute after the appointed drop off window, so maybe she gave up early. I got out of the car and peered into the church, ringing the doorbell because it was before the receptionist reported for work. No shower, no makeup, pjs. Our custodian answered and almost fell over as he took in my appearance. He looked as though he was afraid my butter had slipped my biscuit, but as always, he was unfailingly polite as he explained the breakfast was on Wednesday.

It was Monday.
The next evening, Tuesday, I set the fruit to drain. Then, Wednesday at dark thirty, I again rose to make my clafouti. I hummed as I mixed, stirred, and baked. This time, I put on light makeup and got dressed. As the timer went off and I took Clafouti II out of the oven, my sleepy mind searched for what was wrong. It smelled great, the pastry had puffed up nicely and browned just slightly, but something was different. The fruit. I had forgotten to put in the fruit. My heart seized as I frantically tried to decide what to do. I looked around and paced a bit

“That’s it,” I said to my dog. “I can’t do this.” I forced myself to calm down. “Think, Bea. What would a contestant on The Great British Baking Show do?”

They would start again. This time I did not hum as I mixed, stirred, and baked. I hauled fanny. Since I’d memorized the recipe by now, things went much quicker. And I made it to the church with a minute to spare. My friend waved merrily as I drove up. She oohed and ahhed appropriately, and I left dear little Clafouti III to meet its fate.

Oh, and some of you are probably wondering what happened to Clafouti I. After smelling it in my house and in my car? I ate it. It tasted delicious.

Clafouti
1 TBSP butter
1 1/3 cups milk
2 TBSP sugar
4 large eggs
½ tsp vanilla extract
¼ tsp salt
1 1/3 cups plus 1 TBSP white flour
1 bag frozen fruit of choice, drained (I use a berry medley)
1.  Preheat oven to 375°.
2. Melt the butter in the microwave, then pour into 9 x 13 inch pan and tilt to evenly coat the pan with butter.
3. In a mixer, add milk first, then all remaining ingredients, except fruit and 1 TBSP of the flour. Blend until frothy and well combined.
4. In a small separate bowl, toss together the fruit and the extra flour.
5. Pour the batter into the baking dish, spoon in the coated fruit, and bake for 30 to 35 minutes or until it’s puffed up and lightly browned.
6. Cut into large square and serve immediately. This also tastes good left over at room temperature.
Recipe adapted from Still Life with Menu Cookbook by Mollie Katzen.
Posted by Bea Tifton at 7:09 AM