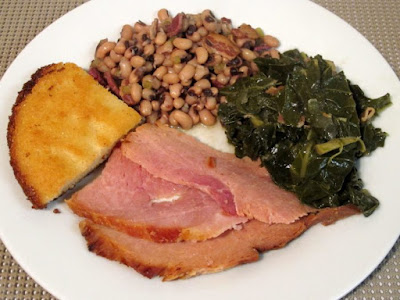 “Peas for pennies, greens for dollars, and cornbread for gold," goes an old Southern saying.

Growing up in the South, it was tradition at our house to eat this meal on New Year’s Day.  That tradition has followed me into my adult life and has been passed on to my children.

“For every pea you eat, you will get a dollar in the coming year,” was what my mama always said. I wonder if that can be adjusted for inflation?  The salt pork and turnip greens were for good luck and prosperity.

As I got older and my circle of friends grew wider, I realized that almost everyone has a New Year’s Day special meal, but not all are the same.

It was only this year, that I decided to investigate the roots of this tradition.

Eating black-eyed peas on New Year's Day is not new. It has been considered good luck for at least 1,500 years. Based off excerpts from the Talmud written around 500 A.D., it was Jewish custom to eat black-eyed peas in celebration of Rosh Hashanah, the Jewish New Year (which occurs in the fall), so it is possible that the tradition arrived in America with Sephardic Jews, who first arrived in Georgia in the 1730s. Another source stated that Black-eyed peas, which were first domesticated in Africa 5,000 years ago, were thought to have made their initial arrival in North America though slave ships, predating the arrival of Jews in the colonies.

Black-eyed peas are now a common staple in soul food and southern cooking so it would hold true that this superstition has its strongest hold on people with some connection to the South, by birth, bloodline or residency.

According to common folklore and cited on multiple internet sites, the tradition spread after the Civil War. During General Sherman's march, the Union Army pillaged the Confederates' food supplies but left the peas and pork, believing they were food for the animals and not for human consumption. The Southern soldiers thus felt lucky to have these supplies to get them through the cold winter. Another Southern tradition states that black-eyed peas are a symbol of emancipation for previously enslaved African-Americans, who were officially freed on New Year's Day after the Civil War.

The significant of turnip greens is much simpler. It falls into the category of “greens” of any variety and is the color of and looks like money, thus, ensuring prosperity.

As far as the pork goes, once source states that it is considered good luck because it is rich in fat, and the fat signifies prosperity. Other sources state it is because the hog roots forward and the reason you should never eat chicken, as they scratch backward.

I will say right now, I had no desire to revisit anything that happened in 2020 so I had an extra helping of salt pork to move forward.

What ever your New Year tradition is, I am wishing you the very best year in 2021.