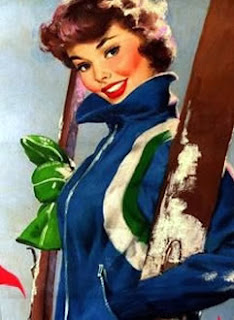 I confess. I love fall and winter, but not so much summer and spring. I live in North Texas. In the summer, the heat is searing and overpowering. I’ve always been susceptible to heat exhaustion, so summer is not my friend. I have to miss many fun things outside because I can’t take the heat. Really.  And Texas only has two meteorological seasons, summer and winter.  I dream of moving to a place where it snows. Not those killer blizzards that I couldn’t begin to know how to negotiate, just some light snow that would make it seem like a good day to stay inside by the fire where it’s cozy and dry. Yes, I know that’s a fantasy, but it’s mine. Please don’t hate me if you’re snowed in against your will.

Imagine my delight when the meteorologist began talking about a possible snow fall. Really? A snow day? My inner child and inner school teacher, let’s be honest, kicked in. How fun. A snow day. Then, the weatherman began hedging. Maybe it would miss me. Those North and West of me would get some. I scowled at the green patch on the map that was splotched right over my house. Still, I remained hopeful that Sunday would be Funday.

And you know what? In midafternoon, it began snowing. Lovely, big flakes. True, not much was sticking. But it was so pretty. I watched out my sliding glass door, fascinated, joined by a very puzzled Maine Coon Cat. It had not snowed an inch since 2015, and not more than an inch since 2010. But it did snow in 2021. 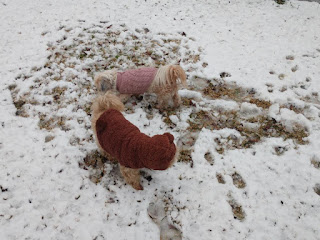 Of course, I had to go out to see it. I bundled my very senior dog, Otis, up into his bear suit (he’s very cold natured and sort of, well, bald in places with age) and my younger dog, Zoe into her sweater, blocked Ranger the Main Coon Cat from going out with us, and bounced out the door. Zoe is pretty Zen. She runs out into the rain and does her thing, doesn’t get cold easily, and is not easily impressed. She didn’t seem to even notice the snow that much. Otis, however, was not a fan. He is almost completely blind, so he was very confused. What the heck WAS this stuff? We didn’t stay out long. 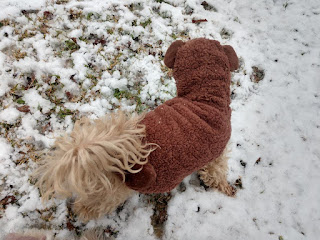 Then I had to go out the front door, sans dogs. My house looked so pretty with the snow still falling and just enough to cover the ground blanketing the yard. As soon as I walked on it, the snow became slush and my grass showed through, but I managed to get the required, “Hey, it’s snowing in Texas” pics. I used the snow on my car to make a snowlady. Her name was Lola and she was wearing holly berry red lipstick. 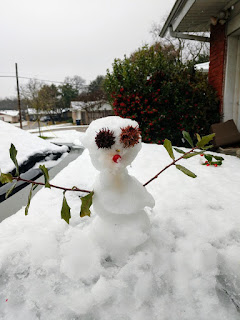 The snow didn’t last long. Some parts of the area where I live got up to seven inches. Some didn’t see a flake. By the evening in my neighborhood, the snow was no longer falling and by Monday, it was gone. But what a glorious, fun Snow Day it was.