This Week's Word - Do You Know Your Geography Terms?

Hi all, welcome again to Smart Girls Read Romance or . . . if you’re a first-time visitor, we’re thrilled you stopped by. I usually post a word that you might be unfamiliar with. I call it “This Week’s Word". As a writer and a reader, I’m very fond of words (makes sense, huh?). I especially love words that relate to terrain, landscape, and geography. I come across words, especially in those old western romance stories, and don’t always know what kind of terrain the author is referring to.

Not long ago, I came across the word below. I hope you learn something new by its meaning! Knowledge is power as they say.

A term used in the Southwestern United States, Spain, Mexico, and other Spanish-speaking regions for a rough and barren landscape that consists of relict and largely uneroded lava fields exhibiting recognizable lava flows, volcanic cones, and other volcanic landforms. This type of volcanic landscape is extremely rough and difficult to traverse. It is characteristic of an arid environment because in more humid climates, lava fields are quickly destroyed by weathering and erosion.

The word 'malpaís' in Spanish translates to "badland," and this describes the area as being extremely rough and difficult to traverse and unusable for crops. Although a malpaís is often another word for the badlands that form by erosion of sedimentary rocks in the same environment, a malpaís is often associated with such types of lava plain terrain as found in a volcanic field.

How to use Malpais in a sentence:

The approach was loose dirt and malpais, which ran off down the gulch in small avalanches under our feet.

Notify Buck Weaver, so he can head them off if they try to cross the Malpais.

This Week’s Book is TRUTH OR DAIRE, a contemporary billionaire romance I wrote not too long ago. Details are below: 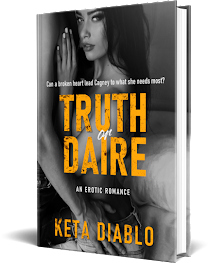 When the unthinkable happens and Cagney Kissler discovers her boyfriend, Daire Bembry, is a lying, two-timing cheater, she tosses him out on his a** and heads to Florida to mend her fractured heart.

The Villa Bay Resort is everything her best friend, Lily, told her it would be, and more. But the trendy, popular bar at the resort, known as Sleazy Swallows, is a little more than Cagney can stomach.

On her way out the door, she meets someone who shares her reservations about public sexual-indulgence. Evan might be just what she’s looking for, and even if he isn’t, she’ll show her ex the true meaning of Truth or Daire.

Thanks so much for stopping by! Hope you enjoyed This Week's Word. See you next month!