Harvest, Autumn, and Lots of #Books! by @JacquieRogers

Harvest, Autumn, and Lots of Books!
by Jacquie Rogers
We were driving home from an early supper (we call it lupper) and I couldn't help but appreciate the harvest season.

My dad didn't grow hops but he did grow lots of corn and beets, as well as barley, oats, wheat, and of course hay, since he had a herd of 150 milk cows plus about 400 head of heifers, steers, and dry cows.  Once he harvested the crops, then he turned out the livestock onto the field to eat the rest of the foliage and while the cattle grazed, they pooped, which fertilized and conditioned the soil for next year's crop.  In the spring, Dad disked it all under and prepared the soil for seeding.  I'm not sure if farmers still do that, but I hope so.

Speaking of which, here's a long shot of the farmstead where I grew up.

Aurora Valentine, star of Aurora's Treasure, wouldn't have seen crops like this in 1885 even though the book is set during the autumn season.  Owyhee County only gets 8" to 10" of precipitation a year so all these crops are grown by irrigation.  The Owyhee Dam, which was the prototype for Hoover Dam (those techniques were NOT developed at Hoover Dam!!!) is just across the border in Oregon, and between that reservoir and the Snake River, northern Owyhee County is very fertile.  Lots of crops are grown, and they're high quality.

On the other hand, I haven't seen many dragons here, so she has me one-upped there. 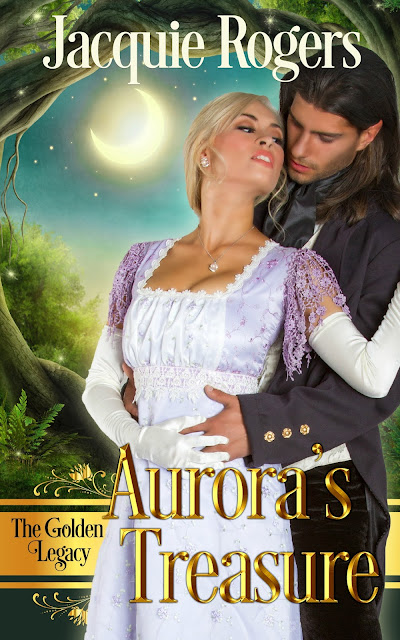 Conal of the Sun Clan will do anything for his grandmother, including risking everything to recover the Golden Legacy in order to bring his grandfather back to her. And to do that, he needs Aurora's help to unlock the curse. Riding alongside beautiful Aurora isn't much of a sacrifice. But losing his soul to goblins is.

Jacquie's Website | Amazon author page | BookBub
Facebook | Instagram | Twitter | Goodreads | Pinterest
If you're on Snapchat, friend me!  My handle is jacquierogers.  You can get videos of Sassy's latest updates there.  And goofy pictures of her scribe.
Keep up with Jacquie Rogers' latest news at the
Pickle Barrel Gazette!
Honey Beaulieu - Man Hunter series