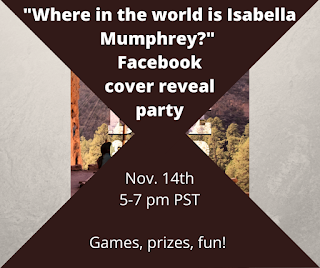 Hello everyone! Eight years ago I had a story idea in my head that I couldn't shake. I discussed it with another writer on our drive to a writer's retreat. Them ore questions she asked the more the character came to life in my mind and I HAD to write her book- which turned into 3 books!

That book was my female Indiana Jones/ MacGyver character who is a Doctor of Anthropology specializing in American Native Indians. That means North, South, and Central America.  Her first book is set in the Guatemalan jungle at a dig site.  Oh the things this child prodigy learns!

The reason I bring these books up has to do with the fact I just had the series all recovered and I can't wait to reveal them to you-the readers. My cover designer didn't an awesome job of updating and bringing more of the adventure/suspense/thriller look to the covers.

And because I am so excited about them, I am having a RAcebook cover reveal party! "Where in the world is Isabella Mumphrey?" We'll have clues to where my character, Dr. Isabella Mumphrey is, I'll reveal the covers, and I'll be giving away lots of prizes to those who attend and participate.

Here is the info:

Go to the above link and click if you are going to participate so you get the posts when the party starts. Two people who gather the clues and tell me where Isabella Mumphrey is in the world will win books, Amazon gift cards, and other goodies. Plus everyone who attends will win something. So join me Nov. 14th here on Facebook. See times in photo below. 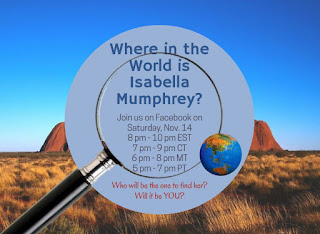 This will be a lot of fun!

Here is the blurb for book one in the series which is on sale for $0.99 until the 16th:

SECRETS OF A MAYAN MOON

Book one of the Isabella Mumphrey Adventure series

Move over Indiana Jones and MacGyver- Isabella Mumphrey has arrived!

Child prodigy and now Doctor of Anthropology, Isabella Mumphrey, is about to lose her job. Unless she can decipher an ancient stone table—and she can. She heads to Guatemala at the request of her mentor, but drug trafficking bad guys and artifact thieves wreak havoc on her scholarly intentions.

When undercover DEA agent, Tino Kostantine, meets Dr. Mumphrey it's obvious she's never been in a jungle or outside of the States. Entangled in helping her discover the truth in the tablets may make both of them lost casualties buried forever.

Paty Jager is an award-winning author of 48 novels, 8 novellas, and numerous anthologies of murder mystery and western romance. All her work has Western or Native American elements in them along with hints of humor and engaging characters. Paty and her husband raise alfalfa hay in rural eastern Oregon. Riding horses and battling rattlesnakes, she not only writes the western lifestyle, she lives it.