The Night I Became a Ghost Hunter by Bea Tifton 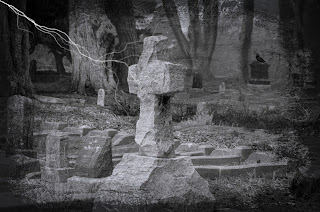 I’ve always believed in ghosts. There. I said it. I even said it out loud, but my cats were unimpressed. They know, you see.

A few years ago, I was in a writer’s group that had monthly guest speakers from all walks of life. One month the founders of the area ghost hunting organization came to speak. They were fascinating and surprisingly down to earth. My friend and I were especially interested when the guys said that they hosted ghost hunting for amateurs at a locally famous restaurant operating in a Victorian house originally built in 1895. She talked me into saying I would sign up.

Well, I went home and made my reservation, but my friend chickened out. I decided to go anyway, by golly. The evening began with a meal prepared by the restaurant staff. Then, we listened to our orientation. We needed to be quiet and serious about this and, as the group was rather large, we were going to have to go in two groups. I was able to go with the first group. The second group included a giggling batch of teenage girls celebrating a birthday party. They were cautioned to be quiet as they waited outside for their turn. 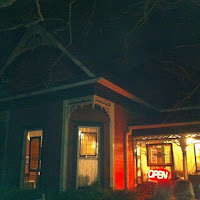 First, the ghost hunter in charge of our group told us about the ghosts thought to currently inhabit the restaurant. One was the lady of the house, and as the bathroom was part of her original bedroom, she was usually in the ladies’ bathroom. Her name was Caroline. Another ghost was of an old farmer, name unknown, and a younger man who like to touch women’s knees and tug at their hair. There was also a young woman who seemed unsure of her surroundings and a bride who looked out of the window of the beautiful Victorian. Things levitated and moved and there were mysterious blue lights. Nothing negative or menacing had ever been detected.

The first thing our guide did was to offer some ghost hunting tools. We all had flashlights, but I snagged an EMF detector, thought to be able to detect a ghost’s electromagnetic energy.  Someone had a tape recorder for EVPs, which are electronic voice phenomena, or voices that can be heard on the recording that are not heard when people were speaking.

The group gathered around a ghost box, which is a transmitter that switches around looking for transmissions and words. The theory is that a ghost who wants to communicate will pull out one or two words at a time to make a statement. I don’t personally believe in that. There’s a thing called matrixing. It can be visual, such as looking at the burn marks on a tortilla and seeing Jesus’ face, because it’s in our subconscious to try to make sense out of an image and people try to find human faces in patterns. Matrixing can also be aural, or heard. People try to make sense of what they are hearing. One woman thought she heard her name. She shrieked and her group became loud and raucous. The lead investigator hurried in to shush them and said in a kind but firm voice, “It’s waaay too loud in here. Ghost hunting is quiet listening.” 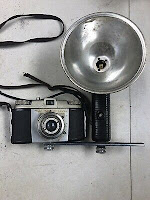 One particularly obnoxious woman followed people around with her husband and took pictures with a huge flash on her camera whenever anyone seemed to be having luck with something or just seemed to be onto something. After she nearly blinded me and gave me an actual start of a migraine, I headed away from the increasingly annoying group and went into the bathroom. I immediately felt a shift in the air. Scoff if you will, but it was palpable. The woman with the flash came up behind me and hit me again, but I blinked and closed the door. I said, really not expecting anything, “Wow, Caroline. Isn’t that woman getting on your nerves?”  The EMF recorder light went crazy. I continued to ask her questions. The lead investigator poked his head in and asked if he could come in. He said, “It seems like you’re getting this a little more than the rest and I bet you’re getting some activity.” But even he was amazed at how Caroline answered yes or no to my questions with the EMF detector.

Too soon, it was time to switch out. Some of the others stayed outside to see what the second group said, but I was tired (it was 2:00 in the morning), and well, tired of them. I drove home and went to bed. I really didn’t think much about my night until the next morning. It was such a fascinating experience. I don’t know if I’ll ever go ghost hunting again. It seems, well, kind of exploitive. Those spirits are people. People who’ve passed on, but didn’t move on. They must get so tired of being questioned and harassed. But I’ll always be glad I went. What a memory!

This photo was captured by another paranormal team at the same restaurant where I got to ghost hunt. Have you ever gone on a ghost hunt? Do you believe in ghosts?