The Bee's Knees by Bea Tifton 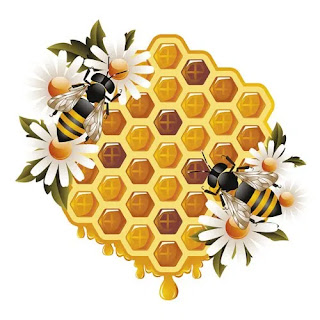 For months, I’d been ignoring them.

Just walking past as they hung around a small opening between the brick and the soffit board that makes up the covered porch of my modest mid-century home.  But, I worried about people being attacked and  about the damage they could wreak. So, finally, after I saw an ad in Facebook Marketplace, I contacted someone who could help me.

I had bees. I walked past them, as I’ve said, for months, and did not ever get stung. They seemed to be most active just before a storm or when I turned the porch lights on for my dogs’ last foray of the evening into my backyard. But, I’d heard they could really damage my house and my lawn guys entered on that side of the yard so I thought I should take care of it.

When I messaged the apiarist, Phillip, he informed me that it would have to be done within the next couple of weeks or the bees would not be able to settle well enough in their new hive to survive the winter. I know how important bees are to our food chain and I don’t like to kill things, so I agreed to let him come the next day. He was very professional and arrived right on time. I showed him where the bees lived and he used a thermal camera to pinpoint where they were. 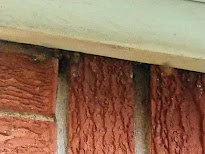 There was quite a bit of yellow. Many heat-containing little organisms. Hmmm. Concerning, but seeing the thermal images was neat. Phillip said that with my permission, he’d get right to work. It would probably take hours.

I agreed, and when he said he needed to go get his shield, I knew it was time for me to beat a hasty retreat as I didn’t have any bee protection gear. I was sorry I wasn’t going to get to see the process, but after avoiding bee stings for so long I was reluctant to break my lucky streak. Over the next few hours, I heard all sorts of odd sounds, wood being pried away (Yikes!), scraping, vacuuming, and one very loud yell followed by an expletive my Mamaw would have made me cut a switch for uttering. Yes, Phillip got stung. It’s an occupational hazard, I guess. He later told me that he’d been stung over 100 times and that it only hurt for about five minutes, with no adverse reactions as his immunity had been built up.

Phillip sent me a couple of progress reports. One message said, “Yup. You’ve got bees. Looks like a big hive. Usually, people don’t notice them until one day, Boom! They see some swarming and realize they’ve got bees.” 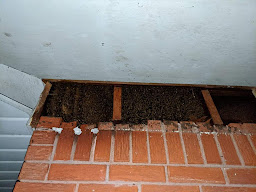 The next picture caption read, “From the dark color of the comb, I’d say they’ve been here for a year. I estimate that you have about 30,000 bees.” Wow. I couldn’t even wrap my head around that number. While I walked past them for months, the little buggers had busily been making honey behind my soffit. Luckily, the damage was minimal and Phillip assured me he would fix it. 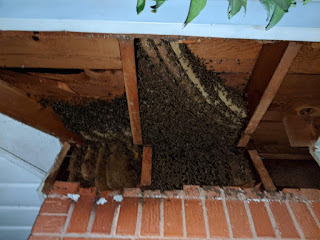 Phillip did his mysterious things for six hours. It was one in the morning before he said he was finished for the night.  The next day, I peeked over to see how it looked. He had sealed the hive for the most part, but a piece of honeycomb was on the ground and a few bees were frantically flying around it, probably trying to figure out what the heck happened.

The next night, earlier this time because he didn’t need to wait until the bees were inactive, Phillip returned and vacuumed out the stragglers, then put everything together again. He gave me a jar of honey as a souvenir. It tastes great, strong and wild. Some people believe that it’s good for one’s allergies to eat local honey. I couldn’t have gotten any more local, but in the future, I’ll be content to get my honey from the farmer’s market. 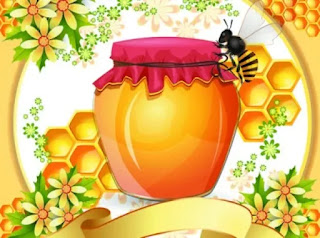