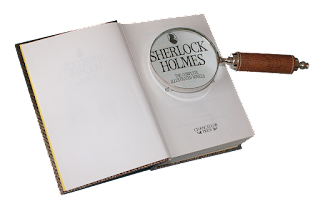 Before I read Sherlock Holmes, I discovered the magical world of mystery in the pages of an old Nancy Drew book.
I was young enough that I didn't know what a series book was. I lived in a very small town, and the books in the library were old editions published decades before I knew how to read.
I wasn't even a teen, but I loved the intrepid girl detective and didn't care that the books were about characters from the 1940's or earlier.
Nancy in her roadster with her girl pals, feminine Bess and tomboy George, and her boyfriend Ned Nickerson was my fantasy of the perfect teenage girl's life.
Bigger Mystery Challenges
I was a precocious reader. From Nancy Drew, I moved up to Earle Stanley Gardner, Ed McBain, the aforesaid Sherlock Holmes, and others of that male-dominated genre.
Then I discovered Mary Stewart! This author wrote mysteries with a woman as the heroic sleuth and that woman had a romance! 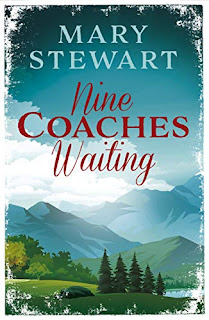 Nine Coaches Waiting was my first Mary Stewart. I quickly read everything she'd ever written and eagerly waited for the library to acquire other books by the amazing Ms. Stewart.
This Rough Magic, Touch Not the Cat, Madam, Will You Talk?, My Brother Michael—book after book of wonderful romantic suspense.
Judging by the Amazon rank for Mary Stewart's books, they're as popular now as they were when I read them. Try one of her books yourself if you've never had the pleasure.
Another discovery awaited me. Her Arthurian saga books—mythical mystery, romance, and suspense at its finest—I was hooked even though they were so different from her previous romantic suspense.
Once the romance genre was "created" and romance novels were the hottest thing going, I moved into that genre, but my favorite romance novels always fell into 2 groups: funny romance and romance with a mystery.
Inspired by the Best
I've always thought what I write was inspired by the wonderful authors I read as a child. I've written several romantic comedy novels, many contemporary romance, and a few romantic suspense.
With The Key To Kristina, the most recent book I wrote, I wanted to combine the elements I love. So there's a little humor, suspense, and romance, of course. What I added this time was a mystery that can't be solved until the end of the book.
In fact, I was so proud of the end result, I put a note immediately after THE END and asked readers to please not divulge what the mysterious treasure was in a review—to let the reader discover what was going on and why. 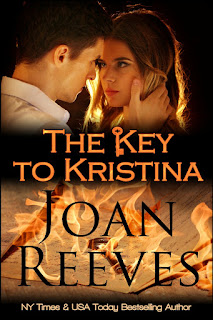 "I may re-read this story and always look forward to works by this author."
I have never seen this reviewer say they might re-read a story. At least not in a review of mine. *LOL*

About The Key To Kristina

Her father never gave her anything but a hard time—until he died and left Kristina a key. But a key to what?

Kristina Rivera's father never gave her anything but a hard time—until he died and left her a key. But a key to what?

A suspicious death and an inheritance. A mystery and a key with a clue leading to a treasure. A romance—and a Quest that may be the adventure of a lifetime.

None of that is what Kristina expects when she arrives for an appointment with a Houston lawyer. Instead of gathering her father's possessions because he's been sent to jail again, she meets Wyatt Morgan, the Executor of her father's estate, and the lawyer who reads the will.

Shocked, Kristina is grief-stricken, confused, and angry. Her father didn't have two nickels to rub together. Why would he write a will? Life has taught Kristina to initially distrust everyone and every situation, but she finds a possible ally in Wyatt Morgan, the will's Executor and a man whose business seems to be fighting lost causes. 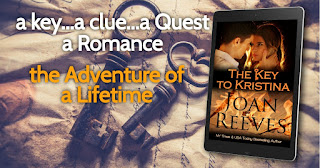 With Wyatt, Kristina undertakes The Quest, designed by her father, to find his hidden treasure.

More than her legacy will be revealed, and danger stalks her every mile of her journey as she tries to discover what The Key To Kristina means.

The Key To Kristina special introductory price of 99¢ goes away in a couple of weeks. Get your copy today!
Remember, don't give away the ending!

Joan is a NY Times and a USA Today bestselling author of Contemporary Romance. Her novels have been published in a half dozen languages, and her ebooks are available at most ebook sellers with audio book and print editions also available. All of Joan’s romance novels have the same underlying theme: “It's never too late to live happily ever after.”
Joan lives her happily ever after with her hero, her husband. They divide their time between the hustle and bustle of Houston and a small house at the foot of the Texas Hill Country where they sit on the porch at night, look at the star-studded sky, and listen to the coyotes howl.

Sign up for Joan’s FREE Newsletter and receive a free ebook copy of a full-length novel when you confirm your subscription. You'll always be the first to know about new books, special deals, and giveaways.