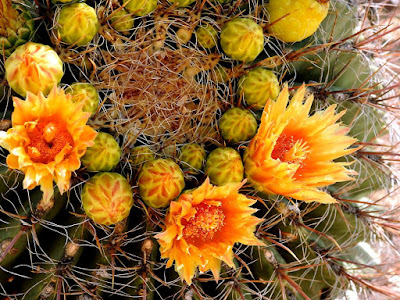 It's been a tough month for me with the disastrous fires in my home state. Just hard to get my head around what has happened and still is happening. Small towns like Talent and Phoenix were burned almost to the ground. Who paid the highest price for this catastrophe? In this case Latinx who had come up there for work in the orchards and were renting. All they might've accumulated from their work was obliterated. My daughter said half the children in those those school districts had lost their homes. The poor, of all colors, once again were unable to protect themselves. So very sad.

In such a depressing time, writing a blog or on the book is difficult as I don't want to just string together words. I want to have what I say have meaning. How do you do that when you are dealing with so much that is difficult and worse? All I can say is it has been a stressful month after the virus and the riots. People ask what more can happen? I don't think we want to know. 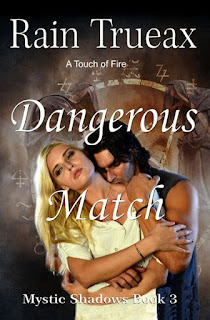 In terms of positive, I do have one thing I can share regarding one of the workshops I attended virtually with RWA's August convention. It was on the subject of using Photoshop-- Leverage Photoshop to Help You Sell by Regina Wamba. She had a lot of information but one thing in particular inspired me to look at my covers although not yet my profile picture. 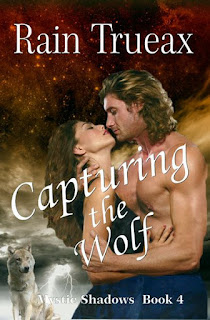 She said, as part of your brand, keep the colors consistent all the way through. So if you are using warm colors, yellows, reds, don't suddenly have a cover that is bright blue. Keep it so it is your brand. (I think that's the gist of that one point. She had others). Not sure I am going to do it with so many books to change, but I think it's a logical idea. 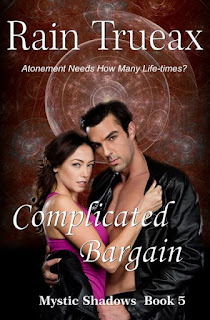 Then, from another source I'd gotten another tip-- actually two. Don't have a title that confuses readers, a word they don't know. Uh oh.  That was Vislogus, a perfect title given when the book was about but also something people would only know what it meant through the blurb or book. If they don't have enough interest to look beyond the title-- lost potential reader. I changed that title to Capturing the Wolf, which also fits the book but just simpler. Will it work better? Who knows. At this point though, I have to go with what I do know and try to please myself and my editor. 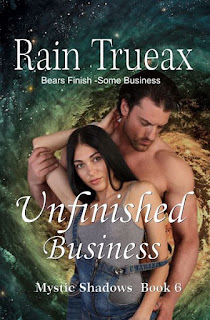 The second tip was to be sure your covers let the readers know what they'll be getting with your story, I'd had my paranormal romances with the couple and the landscape behind them for where they lived. That did fit in a way as these books are about ordinary people born with supernatural powers. Where in the landscape was the magick? It led me to redo not just the Hemstreet witch books but the first two in the Mystic Shadows series Will adding a more mystical background help connect with readers better than those original covers had? Again, I don't know as I haven't yet put out a push for them. 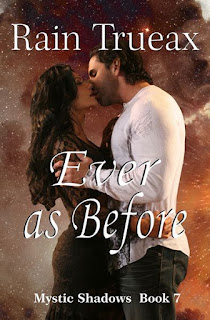 After the five stories of the family, I have two novellas that I want to add to the series before I do much of a push. Plus I need to decide whether to pull this series from Kindle Unlimited. The time for change is open again with the end of October. The books have found few borrowers (of course, I haven't advertised them much either) but maybe wide will be better. I have until a little later in October to decide on that.

Making a poster for the Mystic Shadows series, as well as redoing covers gave me something creative to do when I really was not feeling it for the words. The poster has the novella covers I also will use when my brain comes around to feeling I can write them. Also the first two in the series that are not directly connected to the characters in the next five. The connection is through mysticism and how we gradually learn more about what is actually possible.

Getting the cover with colors that fit is still a work in progress as will be the decision whether to do that with my historicals. Ach! And that is added to the complications of the new Blogger, which definitely is not as easy to use as the original. 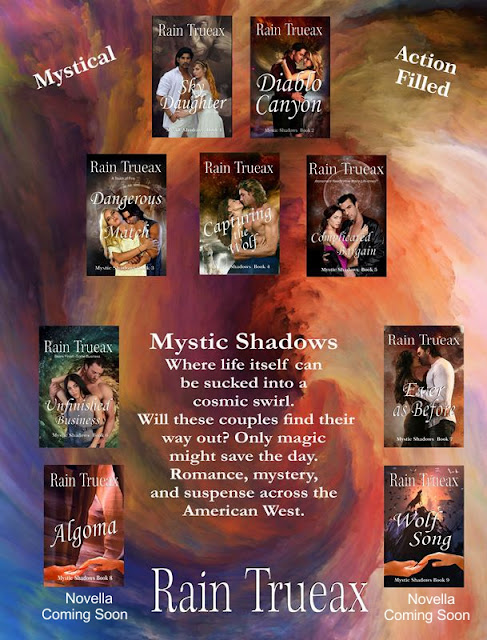 More about my books and me: