Have you heard of Executive Syndrome? It happens to executives who push themselves all week to complete their projects and all they oversee. Then, on the weekend when they aren’t pushing themselves, they sort of collapse and feel as if they have the flu.

I think I have Author Syndrome. I pushed myself to complete my last work on time. Now I have the flu. Sort of. Maybe it’s just that I quit pushing for a bit. Or, perhaps those tacos were prepared by someone who had the flu and spread the bug.

Whatever, this is frustrating. Here I am eager to dive into my next project but I’m feeling like a limp rag. No pity solicited. My next project is A BRIDE FOR DALTON, Proxy Brides #27 to be released on September 12.

Let me tell you about the book I completed. AN AGENT FOR MAGDALA is up for preorder now. It will be released on August 9. I love that day because it’s the anniversary of the day I met my husband, Hero. (We won’t go into how many years ago we met.) 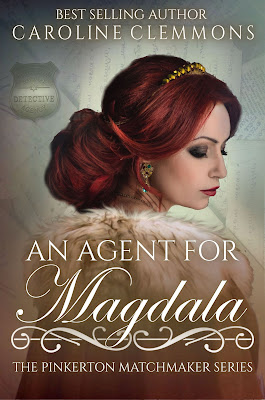 Virginia McKevitt designed this gorgeous cover. I love her designs. She’s created all of the Pinkerton Matchmaker Series covers and all of those for the Proxy Bride Series.

Here’s the summary of AN AGENT FOR MAGDALA, Pinkerton Matchmaker Series book 37.

She craves adventure, but this may be too much.
His job means the world to him…
Capturing jewel thieves will test them…

Magdala leaps at the opportunity to become a Pinkerton agent. Learning the position requires a paper marriage shocks but doesn’t deter her. She plans to get an annulment before her unusual family learns of the situation. She’s determined to prove she has the grit to be an excellent investigator. But, why does she have to be partnered with the one man who has been rude to her?

Douglas “Cloud” Ryan loves being a Pinkerton agent. Otherwise, he’d never go along with his boss’ crazy plan to marry him to a female agent. He’s certain women have no business dealing with criminals. After barely surviving the stagecoach trip from Denver to San Antonio Maggie needs to stay in the background and let him solve the case. He has reasons to distrust women, especially women like Maggie.

Can Maggie and Cloud catch the jewel thieves plaguing an historic San Antonio hotel without becoming victims? Will they take a chance on the love growing between them or will Cloud's stubborn pride keep them apart?

Amazon buy link is https://www.amazon.com/Agent-Magdala-Pinkerton-Matchmaker-Book-ebook/dp/B07V3G4QHY/ the book will be available in e-book and paperback and will be in KU. I love preorders. On release day, the book pops into your reader as if by magic. It is magic when you think about it.

Now, I am going to lie down and think about all that will go on in A BRIDE FOR DALTON.

Posted by Caroline Clemmons at 10:00 AM