Honeymoon and murder by Paty Jager

Had I known all those years ago when my brother offered my help as a prep cook at a remote horse ranch that it would spark a book over forty years later, I would have paid more attention.

My latest Shandra Higheagle release came to me when I’d decided to write another series using the area where I grew up. I wanted to introduce the new character in a Shandra book. But how did I get Ryan and Shandra to his neck of the woods?

A honeymoon! At a remote hunting lodge in the Eagle Cap Wilderness. The only way to the lodge is hiking, horse back riding, or flying.  And that is the way it was and still is for the horse ranch I worked at one weekend.

I had spent a year at college and was home working nights at the hospital as a nurse’s aide. My brother was a wrangler at the horse ranch and told the cook there that his sister would help out one weekend when her help couldn’t be there.  I thought it might be fun. However, for the flight in with the cook and supplies, I was stuck in the back with the supplies of a two-seater prop plane.  The fuel fumes and the bouncing was making me sick to my stomach. Then they said, look we’re landing…I raised up to see the side of the mountain, with a deep canyon below and trees coming at us. There was a small strip of grass or a meadow that the plane landed on.
Once there I discovered I was the person who was up first and went to bed last. I had to get things ready for the cook in the morning and clean up everything in the evening. The down time I had during the day, I napped when I would have rather gone on hikes. There was an outhouse and water that trickled out of a pipe that came from a stream of melted snow.

This experience has been embellished and I’ve added a few more amenities and better buildings to Charlie’s Hunting Lodge in my book, Homicide Hideaway, book 12 of the Shandra Higheagle series.

If there was ever a time to test Ryan and Shandra’s new marriage it is their time spent at the lodge.

Have you ever stayed at a remote lodge or place? Did you like it? 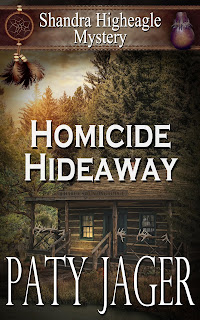 Less than twelve hours after arriving at a remote hunting lodge for their honeymoon, Shandra Higheagle and Detective Ryan Greer find a body. Shandra’s cousin had quarreled with the man earlier, and the clues point to her as being the murderer.

Fish and Wildlife State Trooper Gabriel Hawke, arrives and immediately takes a dislike to Shandra’s cousin. But he is willing to work with Shandra and Ryan to discover the truth.

Paty Jager is an award-winning author of 34 novels, 8 novellas, and numerous anthologies of murder mystery and western romance. All her work has Western or Native American elements in them along with hints of humor and engaging characters. Her Shandra Higheagle mystery series has been a runner-up in the RONE Award Mystery category, and a finalist in the Daphne du Maurier. This is what a reviewer had to say about Homicide Hideaway: “The plot of this story really had me thinking in circles…At times the suspense had me completely on the edge and had me setting down my Kindle so I could relax but then picking it up almost immediately to find out what happens.”

Photo source: DepositPhoto.
Posted by Paty Jager at 12:01 AM