Do you stay with an author whose writing you enjoy if they change subgenre? I hope you are saying an enthusiastic “Yes!” to that question. You see, I’m straying into time travel romance for a few months.

I've tiptoed here before. I wrote a single time travel several years ago, OUT OF THE BLUE, in which an Irish heroine came forward from 1845 to today’s Texas and helped a detective solve several murders. Sales have been okay, but less than stellar. In addition, that was before I learned to choose titles carefully and didn’t know there were already numerous books of the same title. You can find that book on Amazon at http://a.co/8N79HVh. 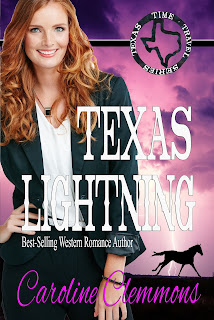 Hoping for better luck this time, I’m writing a trilogy in which each heroine comes forward to today. The first is TEXAS LIGHTNING, book one of the Texas Time Travel Series. This is completed and with my editor now. I expect to release it March 17. In it, a female rancher comes forward from 1896 to find the hero firmly ensconced in what she believes is her home on her ranch. 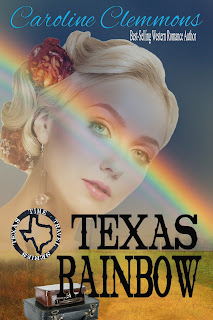 The second is underway, TEXAS RAINBOW. This cover is one of my favorites. In it, the heroine is a flapper from 1920 who comes forward to discover descendants of her friends living in town. She is determined the youngest, Bobby, not get caught up in crime. 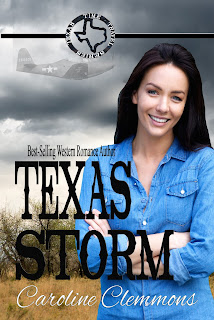 The third will be TEXAS STORM, in which a woman air service pilot (WASP) is forced to parachute to safety during a storm that took out her plane’s engine. Those brave pilots led dangerous lives. Imagine her surprise when she learns she has parachuted from 1943 into today. Reconciling herself to her new life requires a different kind of bravery.

After this trilogy, I expect to return to my usual western romances. At least, until a notion to try something new strikes me, which is one of the joys of being self-published. I can choose what I write and when. This is a great job and I'll keep writing as long as you keep reading my books!

Posted by Caroline Clemmons at 2:08 AM