Probably the two questions I'm most often asked are, "When did you start writing, and who planted the first seeds?"

Some writers may not be able to pinpoint an exact event or pivotal point. Not so with me. It was my fifth grade teacher, Miss Mary, as we students called her. She was my catalyst. Otherwise a shy child, I loved to write book reports and read them to the class. Each ended with a cliffhanger, causing several classmates to get into a scrabble over who would get the book next.

One day after I read a book report on a popular mystery, Miss Mary, smiled broadly and announced, "One day, Laurie will be an author."

Those words stuck somewhere in my mind. No one had ever inspired me to become anything. I tucked her words away in the depths of my heart and clung to them through the years.

And though Miss Mary was an encourager, she was a stickler for discipline. One day I discovered this the hard way. She assigned the class to write an essay describing the perils Columbus must have endured on his journey to discover The New World. While the rest of the class groaned over the homework, all sorts of creative ideas spun around in my head. Where should I go with this story? Oh, the possibilities!

I pulled the memory of the essay from the recesses of my mind and filled in the blanks to give you an idea of what my fifth-grade teacher was up against. My version of Columbus's perilous journey went something like this:

Once upon a time there was a man named Christopher Columbus. They called him Chris for short. Chris just knew the world was not flat like a pancake. But how could he prove it was round like a globe? Especially when he couldn't find anybody who would back him, or give him ships and the supplies he needed to cross the Atlantic Ocean, so he could discover the New World.

After traveling to several countries to beg the kings and queens, Queen Isabella of Spain finally gave in. She agreed to give him whatever he needed, but only if he promised to bring her bushel baskets of gold. Chris said he would then loaded the Nina, Pinta, and Santa Maria with food and water. They couldn't take milk or orange juice since neither electricity or refrigerators had been invented. You see, this was before Thomas Edison was born. And because they didn't have any oranges on board, some of the crew members died from scurvy. That's when you don't have enough Vitamin C in your body. Chris and the others had to toss the dead bodies overboard so they wouldn't stink up the ship.

One night the Nina was destroyed in a raging storm. Waves as high as the Empire State Building struck the ship and tossed it about until it sank. On the morning of October 12, 1492, Columbus Day, a man on deck of one of the other ships spotted sea gulls flying around the ship. Another man saw something green in the distance. He yelled, "Land Ho!" Everyone on board started dancing danced and yelling. The Pinta and Santa Maria soon docked in the bay of the West Indies. (Remember the Nina met her Waterloo in the storm.)

The crew was still whooping and hollering when they docked. The Wakoochie Indians on the island heard the loud commotion and armed themselves with spears, then ran to investigate. Before they reached the shore, Christopher and his men shimmied up coconut, banana and pineapple trees in search of fruit to cure their scurvy. When they reached the treetops, they started shaking them to loosen the fruit. Coconuts, bananas, and pineapples, fell like humongous hailstones, and bounced off the Indians' heads, knocking them to the ground. Some were out cold. 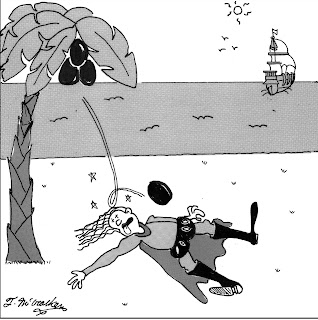 The more fruit that fell, the madder the conscious Indians became, until only six braves were standing. Those six rattled Chris's banana tree until his teeth chattered and he could hang on no longer. His grip slipped and he yelled, "Tim-ber!" before he smacked the ground flat on his back. When he opened his eyes, he looked up into six pair of vicious ones staring down at him. The Indians with red and yellow war paint smeared across their noses grabbed Chris by the arms and yanked him to his feet.

In the meantime, Chris's crew scrambled down from their trees, arms loaded with fruit, and high-tailed it to the ships. With yellow streaks down their backs they pulled up the anchors, hoisted the sails, and yelled, "Ship Ahoy!" Then they pointed the ships toward Spain. A big gust of wind blew them out to sea while a forlorn Chris watched them leave him behind. But he had more pressing problems.

The Wakoochie Indians prodded Chris at spear point toward the village square. One last shove and Chris found himself inside the chief's teepee. Big Chief Kookamunga was a hefty, pot-bellied man. They interrupted him as he finished off a pineapple. The yellow juice dripped from his heavy jowls onto his protruding belly. He wiped his face with the back of his hand. Pointing to Columbus, he commanded his natives with one word. "Raka!"

It must have had something to do with fire because the natives found a rope and bound Chris from shoulder to ankle. When the knot was tied, they dragged him to the center of the village and tied him to a stake. A few minutes later while two natives were busy striking flint rocks to start the fire, Chief Kookamunga jostled out of his tee-pee toward them shouting, "Oola! Oola!"

Chris figured it meant, "Wait! I've got a better idea." The chief grunted and pointed to a large cannon a ways down the beach. The Indians pulled Chris from the stake and hauled him to the cannon still bound. They stuffed him inside, feet first and belly down. He struggled and tried protest, but it was no use. They had crammed his mouth full of ripe bananas and the ropes were really tight.

The Indians turned the cannon toward the ocean and aimed it up and out. Chief Kookamunga lit the cannon and fired the shot that propelled Chris into the sky like a missile. The other natives stood by and watched him grow smaller with every passing second. 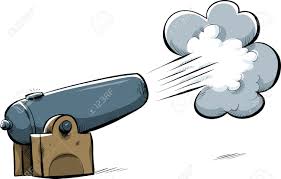 To this day no one knows what happened to Christopher Columbus. We can only guess. So, if on some clear, moonlit night you happen to see a shooting star, stop and salute it, because it might be Christopher Columbus still orbiting the earth. I wonder: Does he knows it's round yet?

By the time I finished reading the essay, the class was in hysterics. The girls giggled and the boys slapped their knees and roared. As I stood proudly, and giggling too, I felt sure an A+ was coming my way for my rendition of the Columbus story.

Then, a gruff voice behind me spoke. "Laurie!”

I turned to look at Miss Mary. One eyebrow was arched and she was not smiling. I felt the air deflate from my ego before she said, “I want you to re-write that story. And this time, make it more realistic." 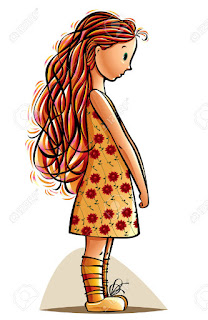 My face burned. I thought the story was perfect. And the class loved it. Besides, I wasn't sure of the meaning of "realistic." But that day I reluctantly added it to my vocabulary.

Not that I've used it very often since.

Although Miss Mary spurred my imagination in 5th grade, she also reined it. No one knows the power of his or her words, how they will affect another. I credit Miss Mary with planting a seed that would one day sprout into a desire to become an author.

Miss Mary has been gone for decades, but her son made an appearance at a book signing for JOURNEY TO FORGIVENESS, the first of (so far) my ten single titles and anthologies. In his words: “I had to meet the student who dedicated her book to my mother.”

If you'd like to check out JOURNEY TO FORGIVENESS, the first of my (so far) ten titles and anthologies, here is the Amazon link: http://a.co/dt41NwS

Laurean Brooks lives in rural northwest Tennessee with her flea-marketing/antique-hunting husband, two labs, and a cat. She writes inspirational romance with heart, humor, and unpredictable characters. Chivalrous heroes stand by to rescue their ladies from a plethora of disasters along the way. Her sassy heroines are familiar with the taste of their own shoe leather. "Foot-in-mouth" disease prevails throughout her stories. You can learn more about her at her website, http://LaureansLore.blogspot.com