I have an upcoming release on the 24th of this month - His UnBearable Touch.

In it, my heroine is blind. She wasn't born blind, but lost her sight as an adult. She's spent years hiding away, then it took a long time for her to get back out in the world and reclaim her life. I had a few people look at me and just straight out ask. "How can you write a blind character? Doesn't that get weird?"

Weird? Sure. Anything that's 'not normal' is weird.

Me writing from a man's POV is weird.

Me writing in another era is weird.

But I try to find the way that I can identify with the character and that's how I get started.

Years ago, when my son was in elementary school, I took him with me to vote on a November 2nd and there was an odd dark spot in the vision of my left eye. Thinking I was just overly tired and having had 'floaters' in my sight for as long as I can remember, I just let it go.

The next morning the spot was gone, but there was a thick dark line at the top of my vision. The next day I could only see down the side of my nose. I went to my eye doctor and from there we went through four specialists in one day. Every time it was a new possible diagnosis. A new fear.

At the end of the day I was diagnosed with Optic Neuritis. My optic nerve had decided to take a siesta. I explained it to my son this way... My eye is the monitor on the computer. The brain is the CPU. The cord connecting the two doesn't want to work.

By the next morning, my whole left eye was dark. Empty. Night without all the beautiful stars.

Meds and rest. I was told that I'd likely get my vision back in six to seven weeks... Nearly eight months later I could see the same through my left eye as I could through my right... almost.  I stil have depth perception issues from time to time, but I still remember those months in the dark.

The fear. The frustration. The confusion. And yes, walking into something on the left side of my body because I couldn't see what was there.

When I had the idea for the story I sat there mulling over the idea, wondering if I could convey the emotions and struggles of a blind woman. Then I thought... Yes. Yes, I could. For there was a time that I considered what it would be like to have half my world dark for the rest of my life.

I wanted to share those emotions with others and yes... the love that she finds. We could all use a little more love in the world. 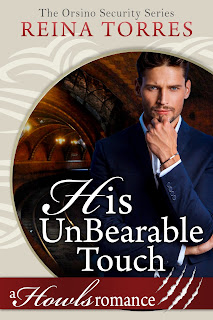 She was a woman who lived in the dark – She brought light into his lonely world – If he lost her, he’d lose more than just his heart, he may lose the rest of his humanity.

Ten years ago, Bear Shifter Valerio Orsino followed his heart and moved from Italy to America searching for his mate. There was one moment when he felt as though he’d come so very close, only to have the feeling slip away like a ghost, and so he stayed hoping that Fate would play his hand. His brothers followed him to NY and now, his older brother, Salvatore, is happily mated. Valerio feels her presence again, and even if his younger brother scoffs at the idea, everyone else encourages him to look again. An odd twist of fate puts him in the right place to be a hero, but unlike the countless times he has assisted other people, the woman he finds in his arms just may save him… the curvy beauty is his mate, his love, his destiny… and she’s blind.

Allegra Rossetti has lived in darkness for nearly a decade. After a vicious attack left her blind and withdrawn, she gave up on her music and enjoying life. As time went on, the music that lived in her heart would not be denied and she made the decision to step back into the world outside of her apartment building, if only to share her music with others. It took every ounce of her courage to step outside, to breathe the crisp fall air of Central Park, and trust that this time around life wouldn’t be so cruel to her.

A careless error by an overzealous friend puts Allegra in danger and when she’s pulled from one unexpected embrace into another, she is astonished at her reaction. Jealousy took her sight and left her with a fear of intimacy, but with Valerio she finds herself reaching out instead of pulling away.
A vengeful heart threatens to pull them apart and extinguish her light forever. Could Valerio lose what has taken him a lifetime to find? Will Allegra trust him enough to take the leap? This is the Book 2 of 3 in The Orsino Security Series. The first book, "Her UnBearable Protector" tells the story of the eldest Orsino Brother, Salvatore, who is hired to protect a feisty and full-figured fashion designer and finds his match in more ways than one. The third book will tell the story of the youngest Orsino brother, Uberto.
Posted by Reina Torres at 12:00 AM