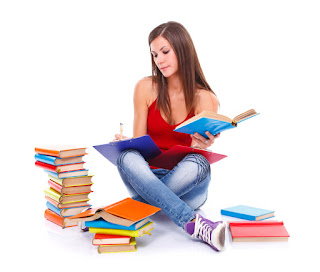 My favorite part of writing a book, any book, be it a western, an action adventure, or a mystery is the research.

I can spend hours reading and researching something for a book. For instance, this week I've been watching old movies and reading articles on the process of haying with horses because I have a "city slicker" in my historical western work in progress who has to help with the haying. I not only know how the equipment works, how much muscle it requires to run them, but I've figured out which he'll be good at and which the heroine can show him up with.

Spending all these hours on learning more about this equipment may seem a bit much, I now have information for another book I've been thinking about writing for some time. It also deals with farming in the 1800's and I can use this information for that book as well.

The part about research that I really like is when I stumble over something that won't work for the current book but I have an "aha" moment that starts me writing down a premise for another book.

And the best part about research is meeting people whether in person or online when I need a contact to help me discover the information I need for a book. I've written to historical societies, museums, and bloggers to find out information. For my book Isaac: Letters of Fate, I contacted the Montana Assay office to find out how they marked their gold bricks in 1887. I enjoy the hunt and discovering things that might not be easy to find. The trivia about a place or person that adds a little touch of color to the story.

My newest release, Killer Descent: A Shandra Higheagle Mystery I made the online acquaintance of a female coroner who helped me with the death and wounds on my murder victim. Emailing back and forth with her to get information was fun, and I now have a new friend and person I can email when I need information like this. 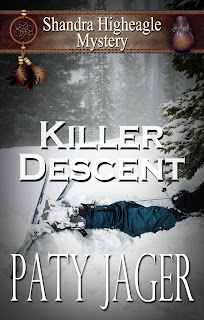 Here is a peek at Killer Descent, book five in the Shandra Higheagle Mysteries

Once again Shandra Higheagle finds herself a suspect in a murder investigation when an ex-lover is found murdered on a Huckleberry ski run. A past she’d planned to never divulge now must be shared with the first man she’s trusted, Detective Ryan Greer.

Ryan puts his job in jeopardy when he’s booted from the case and uses all resources plus a few extra to prove Shandra is innocent. The information leads them down a road of blackmail and betrayal of the ugliest kind.

This is a scene that uses the forensics I discovered from my research.
“Cathleen says this is now a homicide. She just sent me the forensic autopsy.” Ryan went in the other room and came back with his laptop. “It’s easier to read documents on here than my phone,” he said, placing his laptop on the counter.
Keys clicked and his attention was riveted on the computer screen.
Shandra wiggled on her stool, wondering what the report had to say.
Ryan finished reading and turned to her. “It was definitely a homicide. A twenty-two caliber bullet entered his skull, killing him instantly.”
“Twenty-two? I didn’t think a bullet that small could kill someone.” She thought about the rifle she carried when on the mountain. It was a .38. Strong enough to deter any of the large animals on the mountain.
“Used the way this one was, it is deadly. It had to be someone Landers knew. According to the report, the bullet entered through his left temple. The stocking cap he wore must have been frozen over the hole. That’s why we didn’t see it.” Ryan stared out the window. “He was laying on his right side. That’s why we didn’t see any blood. The forensic specialist says the barrel of the weapon was placed against the head and the trigger pulled. The smoke left a dark coloration and the gases from the firing ripped the skin around the wound.”
Shandra shuddered. “How could someone stand next to him and pull the trigger?”
“It was someone who was cold and calculating.” He read a little more then closed his computer. “Do you own a twenty-two?”
She stared at him. “No.”
“Good. That’s the first thing the state police will ask you when they question you.” He sipped his coffee.
“Do you think the gun in Carl’s hand in my dream is the murder weapon?” she asked.
Ryan turned to her. “The pistol that killed him must have been Landers’. Either he was carrying it and someone took it away from him…”
“Or someone staying with him took it from his possessions and planned to use his own pistol on him,” she finished. Her thoughts went straight to Tabby, who was doing her best to pin the murder on Shandra.
“Finding that weapon is the clue to the killer,” Ryan said.
“If it’s small, it could be anywhere. The killer could have dropped it in a snow drift or tossed it in the garbage at the lodge.” Shandra wasn’t feeling confident they’d find the weapon.
Ryan dug into his food. “The good news is you don’t own a twenty-two.”