I was bemoaning how much I pay in taxes when I came across a quotation about those dreaded income taxes.

Rob Knauerhase said: "Isn't it appropriate that the month of the tax begins with April Fool's Day and ends with cries of May Day!?"

Eureka! I had the inspiration and title for this post. After all yesterday was April 15, usually the annual pay-up and gripe day if you live in the U.S.

For those of you who live outside the U.S., that's the day our annual tax returns are due. The IRS has grown more understanding over the years and now gives a couple of days grace period if the due date falls on Friday or a weekend.

I always think it's better to laugh than cry so here are a dozen quotations that show taxpayers all have one thing in common regardless of political party affiliation: hatred of income tax and those complicated forms, schedules, and instructions.

"The income tax created more criminals than any other single act of government." ~ Barry Goldwater, Politician

"Be wary of strong drink. It can make you shoot at tax collectors... and miss." ~ Robert A. Heinlein, Author of Science Fiction

"The income tax has made more liars out of the American people than golf has." ~ Will Rogers, Humorist

"Look at it this way: If you don’t spend your dollars on the IRS, you’d probably just squander it on foolish things, like food, rent." ~ Cindy Adams, NY Post Journalist

"The only difference between a tax man and a taxidermist is that the taxidermist leaves the skin." ~ Mark Twain, Author

"I am proud to be paying taxes in the United States. The only thing is I could be just as proud for half of the money." ~ Arthur Godfrey, Humorist

"The hardest thing in the world to understand is income tax." ~ Albert Einstein, Genius

"Unquestionably, there is progress. The average American now pays out twice as much in taxes as he formerly got in wages." ~ H. L. Mencken, Author

"The difference between death and taxes is death doesn't get worse every time Congress meets." ~ Will Rogers, Humorist

And, last, but not least, let's hear from an IRS professional who was quoted as saying: "The trick is to stop thinking of it as your money." ~ IRS Auditor 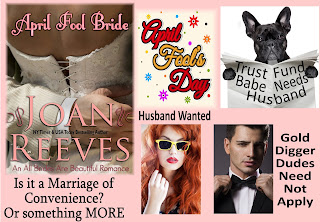 May I suggest my romantic comedy APRIL FOOL BRIDE which is on sale for only 99cents--no April Fool joke!

Oil heiress Madeline Quinn needs a husband by the time she turns twenty-five in order to claim her full inheritance. Mad Maddie, as the tabloids christened her, has learned the hard way that men only see dollar signs when they look at her.

Maddie decides a marriage of convenience is the only answer. She turns to the one man in the world she can trust, her housekeeper’s son who always treated her like a little sister when they were kids growing up together.

Jake Becker hasn’t seen Maddie since the night she tried to seduce him. Why should he help the woman who changed the course of his life? Simple. Revenge.

Or is it something else? Something hot and smouldering that will not be denied? 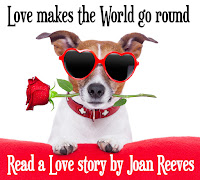 Triple delighted if you sign up for WordPlay, my email list/newsletter for readers so I can give you a free book.
Posted by Joan Reeves at 1:00 AM