Cursive for Pantsters - Slow Down and Get Organized

Do you have a friend who comes up with … uh … unusual ideas? I do. My friend Sandra Allen* had a brilliant (?) plan recently about something we should try. 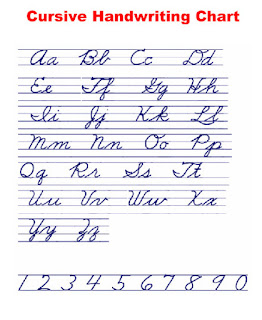 Sandra and I have been friends since the eighth grade and have corresponded with each other for decades—through handwritten and typewritten pages. Recently, word-processed snail mail letters, email messages, and texts have been added to our communication methods. She’s a retired elementary school teacher who lives in North Texas; I’m retired now too and live in the Pacific Northwest. After lamenting the decline of cursive writing in education, my friend’s latest brainstorm appeared in a letter she mailed to me—one she’d created using word processing and sent via the United States Postal Service: We should write snail-mail letters to each other in cursive like we used to. Was I up for the challenge? Of course I agreed.

I searched the house, came up with a yellow legal pad, and then sat down to write. It quickly became apparent that unless I wanted a page filled with cross-throughs, rambling scribbles, and arrows to insert thoughts and omitted words, I’d have to stop and organize my brain before putting pen to paper. So I considered what I wanted to tell my friend, planned it out in my head, and started writing. About half-way down the page, I had to stop, put down my ballpoint, and shake out my hand. Like my last attempt at pushups, I found that my writing muscles hadn’t been used for creating more than a few repetitions in a long time! But I did manage to pen several pages (legibly!) and send the letter on its way. In Sandra’s response, she closed her hand-written letter to me with these words: This was harder than I thought it would be!

Slowing Down Can Be Fastest

Aside from giving me stiff fingers, this exercise reminded me of the value of taking a few moments to organize my thoughts before sitting down to write a story. No, I’m not one of those people who outlines her story – I’m a “pantster” who  creates by the seat of her pants. But this exercise in cursive forced me to slow down and consider each word. I realized my fiction writing would benefit from this approach. I’m not going to write a 350-page book in longhand, but if a scene is giving me trouble, I’ll take out pen and paper and try to create it the old-fashioned way, focusing on each word. Slowing down can sometimes be the best and fastest way to get something done!

*Sandra Allen and I co-authored I.O.U. SEX, available in paperback and ebook formats from Amazon, Barnes & Noble, Smashwords, and other online booksellers. We collaborated via email and cell phone.
Amazon eBook Link
Posted by Sandra Nachlinger at 9:54 AM