What would you do if you had a chance to work with one of your most favorite authors? Jump at the chance, that’s what! And I even got to talk to her on the phone.


I’m talking about Caroline Clemmons, who wrote the first book of Mail-Order Tangle, about Ellie and Kage, Mail-Order Promise. I wrote Laura and Matt’s story in the second book, Mail-Order Ruckus. I’m going to let you in on some of our early notes.


We already knew that whatever idea we had, Caroline would set her story in Texas and I’d set mine in Owyhee County, Idaho Territory. But that’s pretty much all we knew. Neither of us had characters or any sort of plot in mind. We had several ideas, none of which hit us as the right one. Truth is, I’m not sure who came up with the two cousins and two sisters idea, but I think it was a result of our conversations about how to connect the stories. We’d thought about twin heroes, or stories connected by the heroes’ jobs. Several ideas were batted back and forth. 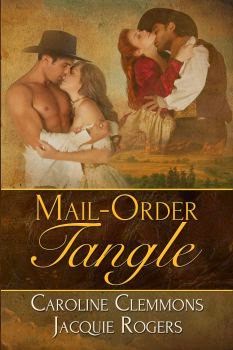 First, we had to decide when the stories would be set. Here’s what Caroline said: “What year are we talking about? I was thinking around 1870 – 1873, but I write 1870 – 1890s, ...so I’ll to defer to you there. I’m happy with any date in the above time frame of 1870 - 1890.” I split the difference and chose 1880. We had to have a year when ranching was relatively well established in Owyhee County. Most of the ranches were started in the 1870s to feed the miners in Silver City, and since the Johanssens had been there three years before Caroline’s story started, 1880 was just about right. Texas, of course, was no problem in that regard, since ranching had been established by the Spaniards in the 1700s, so Texas has a long history in the cattle business.


But why would Kage and Matt have a ranch in Idaho in the first place? And then, why would they leave their Idaho ranch to visit their Texas home? These are mostly final notes, a compilation of suggestions and ideas from each of us. “The Johanssens are cousins. Kage’s father ran the ranch (brand could be Bar AJ, he passed on several years before book one starts. {Note: we hadn't come up with titles yet.}  Kage’s older brother Erik Jr took over the ranch operation—their grandfather Adalbert is still alive so still owns it, and Kage’s mom, Inga, is still alive and keeps house for her father-in-law. Kage and Matt had driven cattle to Silver City and decided to settle in Owyhee County where land was cheap and the need for beef was high. They’ve worked hard to build the ranch and endured four snowy winters, varmints, and Indians. They’re just starting to break even when an especially hard winter hurts their herd.”


And why would Kage stay? Well, that’s when we decided to kill off his beloved older brother. It’s a sad thing, but writers have to do these things. That was Caroline’s job.


Once we fiddled around with the Dickerson sisters’ backstory and a few details about peripheral characters, we were set to go. We shared characters, backgrounds, and some setting, but we didn’t have much input in the plot of each other’s story. One reason for that is we wanted to leave room for both of us to write what we write best and not be too hog-tied by a story bible.


And that’s how Mail-Order Tangle was born. It’s up on Amazon for pre-order now and we’re really excited about it. I hope you enjoy our co-writing adventure. I’m still tickled to have my name on a cover with the fabulous Caroline Clemmons. Wow!