SHARING MY CURRENT WIP, A ROMANTIC SUSPENSE IN THE TEXAS CODE SERIES

A few weeks back I participated in a blog tour and introduced my heroine for my soon to be released historical romance, Katie and the Irish Texan, A Brides of Texas Code Series Novella, Book 1. That turned out to be a fun thing to do, so I thought I'd do the same for the contemporary I'm writing. I'm hoping to have this book completed by the end of this year.

This contemporary romantic suspense is Code of Conscience, Book Two in the Texas Code Series and tells of the developing romance between Miranda Camarrone and Gabriel Hardison (from Book One, Code of Honor). Together, Andi and Gabe work to combat the corruption of a drug cartel while fighting their attraction to each other and a most desirable happy-ever-after.

Allow me to introduce you to the heroine of CODE OF CONSCIENCE, Texas Code Series, Book Two.

1) What is the name of your character? Is she fictional or a historic person?

My character is Miranda (Andi) Camarrone. She is completely fictional.

2) When and where is the story set?

The story is set in present day and takes place in El Paso, Texas and Juarez, Mexico.

3) What should we know about her?

Andi is 28, single, a reporter for an El Paso TV station, and the niece of Hector Camarrone, head of the Camarrone Cartel. Born and raised north of the border with Mexico, she's managed to distance herself from her corrupt relatives until her friend was found murdered. The police suspect the woman's death is Cartel related because she'd been undercover for the FBI. Andi decides to investigate on her own to find justice for her friend and stop the corruption caused by the Cartel.

4) What is the main conflict? What messes up her life?

In a bold move, Andi confronts her Uncle about the accusations made by the police of his suspected involvement in drug trafficking and money laundering. She doesn't believe him when he swears he's innocent, nor does she trust him to mend his ways.

5) What is the personal goal of the character?

Andi wants to bring down the Camarrone Cartel. She also wants to remove her sister, Celia, from an abusive marriage to Enrique Santiago. Santiago is running for Mayor of El Paso and who Andi suspects is laundering money for the Cartel.

6) Is there a working title?

Yes, the title is Code of Conscience.

7) When can we expect the book to be published? 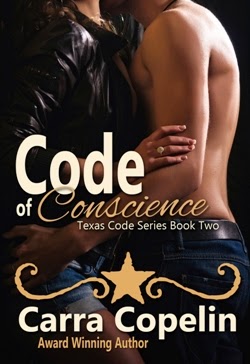 Following is an excerpt:

El Paso, Texas
Miranda Camarrone thrummed red manicured nails against the desk top, irritated and baffled by her boss's attitude. "This is a great opportunity and you know it. The timeline works right into the story I'm already investigating."
"Forget it, Andi." Harry West, the crusty station manager, pounded his fist against his desk to reinforce his statement. "No way in friggin' hell am I going to send my top investigative reporter across the border into Juarez for a story like this. You're in enough danger already investigating your uncle and his cartel. Just stay with your usual snitches and informers."
Deep down, she knew he had her best interest at heart. Though his lack of trust in her instincts had become a serious hindrance to the way she performed her job. He'd been her protector as well as her boss for the years she'd been employed at the El Paso television station and she wondered, not for the first time, if he was able to separate the two.
"Harry, I'm going to do this. My best friend is dead and I'm determined to find out why." She leaned forward bracing her forearms on the desk.  "I need to know if my family's involved. The best way to do that is to investigate this on my own."
"What sounds do you hear when I speak?" Pinning her with a belligerent stare, he pulled the perpetual cigarette butt from between his lips, replaced it with a new one then lit it with the used one. He disposed of the old butt in the already overfilled metal ashtray, crushing it amongst its multiple counterparts and glared at her over the top of his glasses. "I said no."
"I'll be under the watchful eyes of INTERCEPT. They won't let anything happen to me."
"No way, Andi, it's too dangerous."
"But, I—"
"Never trust a government agency," he growled. "I don't care if they're BP, ICE, FBI or your local HOA. If they use initials, they lie."
"Jaded much?" she retorted.
"Yeah, well . . ." Shuffling paper stacks until he found his pack of cigarettes, he lit still another one, dragged deeply and softened his demeanor. "Besides, I promised your mother I'd look out for you. Desi worried about her kids."
"I know she did, but we've all turned out okay, don't you think?"
"Celia's future seems secure since she married that up and comer, Santiago. I hear he plans to run for governor with eyes on the much larger prize in a few years, and Cisco has made a go of the family business." He stood and poured coffee into a brown cup that had been white when she'd given it to him at Christmas six months ago. Resting his hips against the credenza, he continued, "You, on the other hand, give me ulcers."
"Careful, Harry, your soft side is showing." She smiled, leaned back in her chair and, with just the right amount of pout, gave him the look that had generally gotten her what she wanted. "Seriously, let me—"
"Andi," Harry said in his most parental tone. "I mean it. You will not pursue this story, either undercover or on your own. End of discussion."
"All right, Harry, untwist your drawers." Standing, she picked up the spiral book with her scribbled notes. When she kissed him on his stubbled cheek, he shifted uncomfortably. "It's Friday night, will we see you at Rosa's later for poker and pizza?"
"I'll try."
"Good." She walked toward the door and stopped, her hand on the knob. Facing him, she said, "By the way, I'm still going to that fundraiser for Santiago tomorrow night. You wouldn't want to be my "plus one" would you?"
"I'd rather take a beating than to dress up and go to that shindig." Harry glanced up at her from a story he'd begun editing. Suddenly, realization of her mock sincerity registered in his glare. "Very funny. Give Celia my best?"

I hope you enjoyed my excerpt for CODE OF CONSCIENCE, Texas Code Series, Book Two.
Thanks for joining me today. Remember I love it when you leave a comment.
Carra