GOOD GRIEF! Has anyone ever heard that song, “Let it Snow?” After the past few days, it has new meaning for me. Mind you, I lived for a dozen years in the far north where Zero and below were not uncommon temperatures in January and February. But even in the far north, we never had weather quite like it has been in North Central Texas the past week. At least we could get out of the house and get around town. Snow you can contend with. Sleet? It’s just nasty!

Good weather for reading and writing though. Unfortunately I didn’t get much of either done. What I got done mostly was marketing. I’m putting that necessity into the same category as sleet.

One of the things I do enjoy about the cold weather is sleeping. In the summer months I do not sleep well because I can never get cool enough. Give me a twenty-five-degree night and I can catch up on all of my lost sleep.

And that brings me to my current WIP. I’m kind of stuck at Chapter 15. It’s a pivotal chapter in which the hero and heroine experience separate epiphanies. They each make decisions that will change their lives and take them in unplanned directions. I’ve thought I had it two or three times, but then lying in bed half-asleep in the early mornings, all toasty and warm (that’s when I do most of my writing), something always has cropped up to take me in a new direction. Consequently, I’ve rewritten the chapter about six times now.

I’m at a stage again where I think I’ve got it. I hope so. I need to move on and tell the rest of the story. This book is Book #2 of “The Sons of Texas” trilogy. I had intended to get it on the market in June. Ah, the best-laid plans, etc., etc…..

Speaking of books, I’ve uploaded onto Amazon a 3-ebook bundle: THE LOVE OF A COWBOY, THE LOVE OF A STRANGER and THE LOVE OF A LAWMAN. These 3 contemporary romances are set in Idaho where I lived a dozen years. I combined 4 counties with which I was familiar and a few landmarks and created a fictitious environment for those stories to happen. 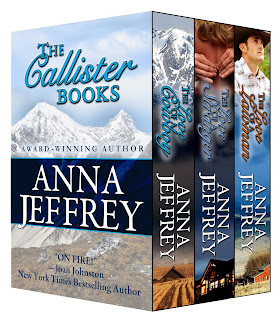 Idaho is such a beautiful place, a writer doesn't have to make up much. Oddly, readers have written to me and told me they know exactly where Callister and Cabell County are….But they assume too much. There are no such places. It’s all fiction. The freedom of writing fiction is liberating.

By the time I post again, Christmas and New Years will be behind us. I’m planning a quiet, no-drama holiday. I’m off work for both Christmas Eve and New Years Eve as well as Christmas Day and New Years Day. So maybe I’ll be able to get past Chapter 15 on that WIP.

Merry Christmas and Happy Holidays to all of you.