HOME FOR THE HOLIDAYS…CELEBRATING FAITH, LIFE, CULTURE AND TRADITIONS FROM THE PAST TO THE PRESENT 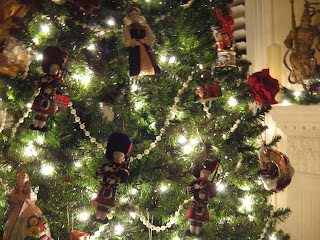 The Holiday Season is here, which (for many of us) means a whirlwind of activity as we prepare to celebrate the holidays on a spiritual level as well as the family traditions we cherish that have been passed down from generation to generation. For me, at present, I don’t really feel as if I am in that whirlwind, but something more like suspended animation. I see so much that needs to be done to prepare for Christmas and New Year’s, but because I am recuperating from surgery, my busy schedule has been hampered.

Everything from decorating the house and setting up the Christmas tree, to baking cookies, mailing gifts, and even enjoying a nice mug of tea (or hot chocolate) as I focus on my writing has been put on hold. I do have some elves that have promised to help me get the tree and decorations in order, but right now they are preoccupied with ‘semester finals’.

Today is actually my first day back on the computer since my surgery last Wednesday, and that’s only because I suddenly remembered I have a blog to write. So, I hope you won’t mind if I use this time to re-post an article I wrote back in 2011, specifically about the Scots tradition of Hogmanay (or New Year’s) and how much it means to me and my family.

When it comes to welcoming the New Year, the actual date and customs practiced for celebrating the holiday often depend upon one’s heritage, culture and religion, as well as what calendar you follow. For most of the world, December 31st is New Year’s Eve – a day often spent in merriment as we bid farewell to the passing year and celebrate the dawning of a New Year with optimism and good wishes. The United States is comprised of so many people from diverse cultures, faiths, and traditions. We may not all celebrate the holiday of Christmas, but we all celebrate the beginning of a New Year. Since, as my friends know, I am extremely proud of my Scots ancestry, my family embraces the highland tradition of Hogmanay! 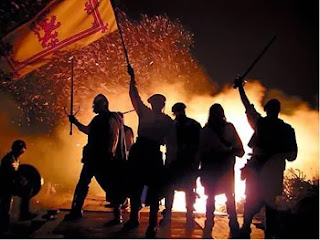 Meaning the “last day of the year”, Hogmanay is an old, much loved custom in the highlands of Scotland. It dates back to the celebration of the Winter Solstice among the Norse yet also encompasses Gaelic customs used at Samhein. Much of Scotland’s traditions and customs are often intertwined with those of the Norse. When one remembers many people of Scots heritage are descendants of Vikings who crossed the North Sea to invade Scotland, it is not surprising in the least to see Norse influence still in existance in the culture and traditions of Scotland.

The customs practiced at Hogmanay begin at dawn on New Year's Eve. After a small breakfast, Scottish homes are cleaned from top to bottom until spotless. Items are placed about to convey what you would like to have happen in the New Year, i.e., coins for prosperity and symbols for health, love, and protection. 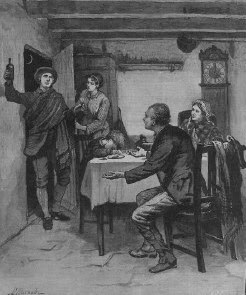 When the clock strikes midnight, windows and doors are opened to welcome the New Year, and a feast is set for all to enjoy. And I mean "all". No one is turned away. And since it is a tradition for adults to go door-to-door singing or shouting Hogmanay, quite a crowd could be expected...which brings me to the Scots tradition of "first footing".

Basically, first-footing is the first person who crosses your threshold after midnight on New Year's Day. Traditionally, he or she should come bearing gifts such as: salt, shortbread (yum!), whisky, and a black bun (the dense, rich Scottish fruitcake). Another one of my favorites is the Clootie Dumpling, a dessert pudding made with flour, sugar, sultanas, currants, spices, and treacle.

The gifts are supposed to bring luck to the house and family in the New Year. Naturally, in return, food and drink are offered to your guests. It can become quite the Céilidh or party as everyone who wants to be the first-footer shows up and you have a house full of guests – and lots of delicious goodies. Oh, and if a tall, dark (preferably handsome) man is your first-footer, needless to say that brings the best luck of all! Makes you wonder if whomever invented this tradition was a romance writer, doesn’t it? On the other hand, should a fairhaired man show up on your doorstep, the luck may not be so good, as they are a reminder of the Viking invaders. Hmmm.

Of course, no gathering would be complete without everyone singing Auld Lang Syne, the traditional New Year's anthem written by the famous Scottish poet, Robert Burns. And lest you think I jest about the level of merriment and partying for Hogmanay, the day after New Year's, January 2nd, is also a holiday in Scotland...no doubt a much appreciated day to recover from overindulgence. 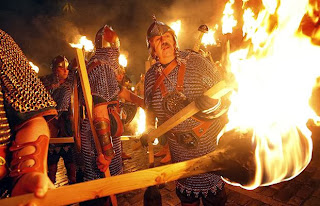 Among the most popular traditions upheld today are the torchlight processions throughout the highlands. For example, in Edinburgh, you might see an assortment of Vikings and Scottish highlanders dragging a Viking warship as they lead a group of 15,000 people bearing individual flaming torches. Accompanied by pipers, they walk from historic Parliament Square on the Old Town's Royal Mile, down the Mound, along Princes Street and Waterloo Place, and up to the ancient Edinburgh meeting ground Calton Hill. Phew! Talk about a hike. Most cities, towns and villages in the highlands will all have a torchlight procession, which culminates with everyone igniting a roaring bonfire and usually features a grand fireworks display.

The bonfire itself has a long history and great importance at Hogmanay. It represents everything from the Sun and the driving away of evil spirits, to how light will always conquer the darkness, and the belief that the bonfire will secure happiness and luck in the New Year. The bigger the bonfire, the better the luck. In fact, great care has always been taken to ensure the bonfire would not go out. Since everyone in the towns and villages would each carry a torch to light the bonfire, certain sure that the tradition must be upheld by the entire community, it would be a terrible omen of bad luck should the bonfire go out before sunrise.

Although each country may have its own special New Year’s Eve customs according to its culture and heritage, at midnight with the tolling of church bells and the echoing from clock towers, music, merriment, and fireworks are held all over the world. From Sydney, Australia to Paris, France, from London, England to Stockholm, Sweden and Copenhagen, Denmark, hundreds of thousands of people gather together in public settings to welcome the New Year. 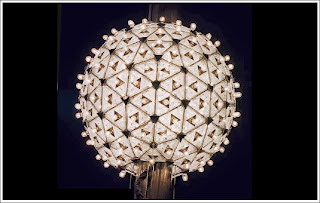 One of the most famous gatherings takes place at Times Square in New York City. Each year, a Waterford crystal ball begins to make its slow descent at 11:59 pm. Far below its lofty height, people join in unison to count down the final moments until the New Year officially begins.

Of course, not everyone celebrates New Years with crowds and noise, and the closest they get (or ever want to get) to festivities like Times Square is watching it on television. The truth is, there are many who prefer to embrace the peace and quiet of being by hearth and home. You may live alone and enjoy sitting by the fireside with a good book and a glass of wine. Or, you may prefer staying home, close to loved ones, where you can reflect, remember, and celebrate the dawning of a New Year as a nearby clock strikes twelve. 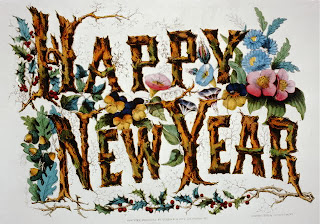 But whatever way you celebrate the New Year, I hope that 2014 brings you good health and happiness, peace and prosperity, and renewed faith in the hope and promise that tomorrow always brings. Thanks for stopping by, and I wish you all Bliadhna Mhath Úr or Happy New Year!

Posted by Ashley Kath-Bilsky at 12:10 AM