FAMILY. THE GIFT THAT KEEPS ON GIVING.

This has been quite a year. One year ago last July, my niece, her teen-age daughter and two little dogs moved in with me. ME! The spinster of the family. Sam, my Schnauzer, was content to be an only dog-child so he was not thrilled. I'll explain why later. 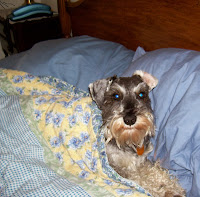 I've lived with just a dog pretty much since I started living on my own. My brother lives in another town on the other side of Ft. Worth and his daughter lived in East Texas. Over the years, we had only visited occasionally. She had family there and a busy life.

Well, not long after moving to a high stress job in the tiny town of Vernon, she was diagnosed with breast cancer.  This called for a move to be closer to good care and family.  She packed up the teen and the dogs and I suddenly became mom and grandma in one day.

I love them all, but this was a huge change for someone who never had children and lived pretty contentedly alone, writing and staying busy with my friends. So, this was my life for a little over a year: 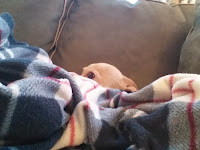 She found Clark on the side of the road as a puppy. We're pretty sure he is autistic. He lines up his food and barks at it. He has a multitude of  odd behaviors. Nail chewing and hiding under blankets. When not bathed regularly, he smells like old tacos. The dog whisperer would have his work cut out for him.


Nugget, belonged to an elderly man who passed away. No one took the dog so he was turned over to a shelter where he lived for several months before nuzzling into my niece's neck when she brought Clark in for shots. He squirmed around like a delirious puppy and licked her chin. He isn't dumb. 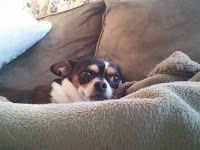 His ears are huge... like bat wings. He sheds about a pound of hair a day.  He is only about nine inches  tall, round as a barrel and struts around on short little legs. Due to a throat problem, he coughs, gags and sounds like an old geezer with a two pack a day smoking habit. He growls at being moved off the sofa when he is sleeping. (Which is most of the day.)  I found this  particularly interesting since the teenager exibited many of the same traits.

Ah, the joy of learning to live with a sixteen year old. NEVER wake them up any earlier than absolutely necessary. She had the timing down to the second for getting ready for school. Five minutes any earlier resulted in snarls and glares. Oh, FYI,  teenagers can live on Dr. Pepper, Spaghettio's and jars of dill pickles.

On the plus side, I know who Harry Stiles is and that Pink is not only a female singer but a line of clothing at Victoria's Secret.

I'm sure I was no picnic to live with, but we all managed to get through the year without any major battles, strangulation or screaming matches. I learned to adore the teenager in spite of little dramas like locking her keys in her car twice in one week, washing only one shirt in the washing machine because she needed it later and keeping my mouth shut when she wore her pj's to school occasionally.

We became even closer while my niece was going through surgeries, chemo, job loss and a difficult, non-supportive ex-husband.

I'm glad to say they are thriving. My niece has an excellent prognosis, a good job and a head of very thick, very curly hair. As for the ex, the best revenge is living a good life.

The teen spent a week last summer doing missionary work in Honduras and just returned from the Tiger Cruise on the Naval air carrier, USS Nimmitz. Her youngest aunt was returning from deployment and they allow family to stay on board from San Diego to their final destination in Washington.

Sam and Nugget have become good buddies.  Clark stays buried under his blanket, but I think he will miss them when they leave.

It's really quiet around the house, now, but  it was one of the best year's of my life. I'm thankful for being able to support her during this rough time and looking forward to the coming year. I hope all of you have a wonderful Christmas and a New Year that brings you love, laughter and joy.