The Eiffel Tower in Paris, France is one of the most recognized structures in the world. But what makes it a romantic getaway? The awe-inspiring views? The beauty of the structure? It's testament to stand the test of time? It's ability to stir the heart and soul of a nation?

I visited the Eiffel Tower for the first time in 1987 when I was 19. Almost immediately, I was struck by how imposing it was – tall and strong – it loomed over the city with a silent, yet steady heartbeat. I went to each floor and the view from each took my breath away. The sight of Paris thriving, moving, breathing, stirred my soul like a rousing rendition of Mozart's "Moonlight Sonata."

In 1992, I went back to the Eiffel Tower with my "sweetie." As I suspect all young lovers do, we shared a kiss underneath the romantic monument.

The Eiffel Tower is a testament to what human determination and imagination can accomplish. It's a reminder of not only France's industrial age, but the world's. Maybe that's at the heart of its romantic appeal?

How did such a monument come to stand the test of time?

In 1889, Paris hosted the World's Fair and wanted to commemorate the 100 year anniversary of the French Revolution. Competing plans for a monument were submitted to the committee. The structure was intended as the entrance arch for the Fair.

Eiffel and Campagnie won the commission based on a design by Maurice Koechlin, a structural engineer in the company. Gustave Eiffel had a reputation for building quality bridges, buildings, and train stations. His company had also assembled the Statue of Liberty. Eiffel was not initially excited about the tower and told Koechlin to add more ornate flourishes. After he saw the revisions, Eiffel's enthusiasm for the tower grew.

Construction started in January 1887 and the tower opened in 1889. Many Parisians thought it was an eyesore. Famed novelist Guy deMaupassant detested the tower so much he often had lunch in the restaurant located at the base so he could avoid looking at it.

The tower had a 20 year permit. In 1909, the tower would become the property of Paris and slated for demolition. However, the structure proved useful as a radio telegraph tower. City officials decided to spare it. During World War I, the tower intercepted and jammed German radio transmission. During World War II, Hitler ordered the tower destroyed. That never happened, allowing the structure to become a symbol of the heart of the French nation. Today, the tower is 124 years old.

Did you know?
Gustave Eiffel was born Gustave Bonickhauser? He officially changed his name in 1880.

Question: Have you been to the Eiffel Tower? What's the appeal for you? If you have a picture of you at the tower, I'd love to see it. Post a link the comments.

I'll pick a random commenter to receive one of my Print backlist books: THE HUNGARIAN, THE COUNT’S LAIR, DANUBE IN CANDLELIGHT. Please leave your email so I can get in touch with you.

Stephanie Burkhart is an award winning romance and children's author. She works for LAPD as a 911 dispatcher, loves coffee, and adores chocolate.

Her latest novel is THE SECRET DOOR, Book 4 in the Budapest Moon Series.

"The Secret Door's exciting action, paranormal elements, and romance will not disappoint a reader." - Joy Cagil, Amazon Reader
"I was quite pleased to find an original take on the werewolf mythology and was impressed by the author's choice of location and historical accuracy. The Secret Door is a fun read and is highly recommended." - 5 Stars, Jack Magnus, Reader's Favorite Reviews,

" There is plenty of action and strife in this story as well as softer and tenderer emotions between the couples. Overall, I found the story entertaining." 3 Cups, HCHarju, Coffee Time Romance
"The author held me captive until the end." – Deal Sharing Aunt
"A Great Read." – Rookie Romance 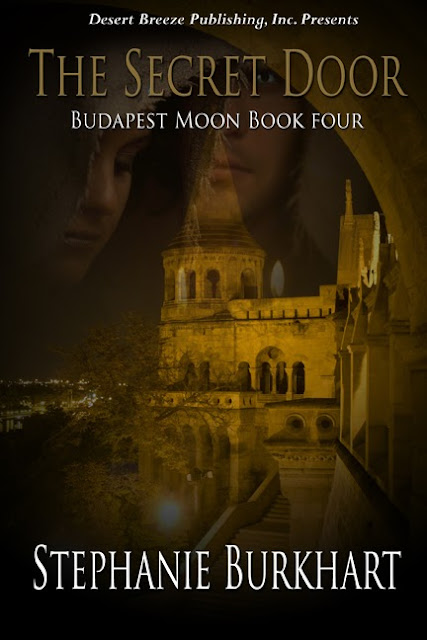 BLURB:
It's 1927 and Lord Zoltan Kristos, Hungary's Minister of the Interior, takes great pains to hide the fact he's a werewolf from the world. Despite his efforts, he's recognized when he goes to the Austrian-Hungarian border to inspect the area for damage from a recent rare earthquake.
Zoltan is accused of stealing Kurt Meklau's witch, Inna, and is recklessly pursed to Volturn Manor, a residence belonging to another werewolf family, the Vargas. After a fight with Meklau, Zoltan barely escapes and his adversary is found dead.
Sophia Varga and Tomas Martin find Zoltan. Sophia is determine to attend to Zoltan's injuries and protect her home, but when Kurt's father, Marcus, comes seeking revenge, Sophia is tested like never before. As Zoltan and Sophia work together, attraction and desire flame between them.
Will the secrets Volturn Manor harbors offer Zoltan and Sophia the clues they need to defeat Marcus and give them the opportunity to explore their feelings for one another?
EXCERPT:
He looked her over seductively. His heart skipped a beat with desire. She rubbed the lotion into her hands and placed them on his stomach. He groaned, reaching out with his left hand and threading his fingers into her hair, jerking her head back so they were eye-to-eye. She set her jaw. His pulse pounded. Something intense flared between them, yet she kept her hands on his abdomen. Encouraged, Zoltan tugged her toward him, pressing her chest against his. Her nostrils flared and her brow furrowed in confusion.
He stopped, reminding himself he needed to offer a choice. "Do you want me to kiss you?"
"No." The sound of her denial was weak. He held her close.
"Do you want me to release you?"
"No."
"How should I solve my predicament?"
"I don't know."
"I do." He leaned close, her sweet fruity scent sending his senses into overdrive. He placed his lips on her jaw and kissed her.
BUY LINKS:
PUBLISHER: http://www.desertbreezepublishing.com/budapest-moon-book-four-the-secret-door-epub/
AMAZON: http://amzn.com/B00B96KCYS
BARNES & NOBLE: http://www.barnesandnoble.com/w/budapest-moon-book-four-stephanie-burkhart/1114281656?ean=2940015989762
ALL ROMANCE EBOOKS:  https://www.allromanceebooks.com/product-budapestmoonbookfourthesecretdoor-1091313-140.html
FIND ME ON THE WEB AT:
WEBSITE:
http://www.stephanieburkhart.com