I so appreciate being invited to be a part of this blog. For those of you who don’t know me, I write steamy contemporary romance. Not quite erotica, just steamy.

As writers, it’s hammered into us soon after we first log on to a computer that the skeleton of story is character. Heart-wrenching dramas, cozy mysteries, horrible crimes in need of solving, assorted thrills and suspense—all rise and fall on the backs of well-developed characters.

As readers, you might not give much thought to exactly what it is that makes you love or hate a book. But if you delve deeply enough, I’m betting you'll discover that the answer is how well the author has handled the character of the protagonist or the villain or the nosy neighbor.

Have you ever read a book in which you didn’t like the main character, but you kept reading anyway? For me, “Deep End of the Ocean” was like that. This powerful book was an Oprah pick that stayed at #1 on the New York Times list for more than a year. I hated the main character, but I kept reading the book. Why? Because her characterization was so well done, I felt as if I came to know her and her screwed-up relationship with her family as I would know a crazy neighbor. And even though I didn’t like her much, she was still my neighbor.

The controversial “Fifty Shades of Grey” is a little like that. Though the writing is sort of clunky and redundant, the character development is rich and deep and lures a reader to look past everything else, even the BDSM relationship. I couldn't help but feel for the kinky male protagonist, Christian. I came to like him and I wanted to know how and why he got to be the way he is. And the author succeeds in titillating the curiosity with just enough of Christian’s past life...all the way to the end of the book....and on into the second book.

Perhaps no series detective has been better developed and captured more loyalty than Harry Bosch in Michael Connelly’s books. I’m fascinated by Harry, though he’s a flawed, tortured character, for sure. He’s the reason I’m a Michael Connelly fan. I’m not the only one fascinated. Harry has so much appeal to readers, blogs are being written about him as if he were a real person. Debates are taking place about how he became the way he is and what will happen to him in the future. And yada, yada, yada…..

I strive for this kind of awesomeness in characters every day in my writing of relationship stories, though I don’t know if I ever succeed. My books don’t have action-adventure, chills and thrills or other plot devices. They rely solely on the people I create and the messes they make for themselves. The premise is how ordinary people act and react when unexpected and extraordinary events are suddenly thrust upon them. The theme is always self-reliance and trust.

I don’t know other authors' processes, but I do it in stages. First, I write events in simple declarative sentences. After I let that digest, I return to the draft and play with surface emotions that are more readily understood by both me and the story people. Next, I seek the  emotion that comes from the depths of a character’s soul, the part of the subconscious that’s autonomic, where motivation lies in all of us. The profound “why.” Sometimes I don't succeed in digging that out until the 5th or 6th pass. And I don't doubt there are times when I never find it at all.

Behavior comes next, conscious and unconscious, active and reactive. And finally, dialogue. That might be the easiest part.… Did I say it’s a process?

I want my stories to ring true. I want my story people to be authentic. I'm sure accomplishing that comes easier to other authors. They probably don't suffer the angst and chest-beating that I do. I probably make it harder than it should be. But that's what I do. 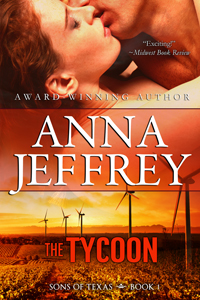 So having blathered about all of that, below is the scene from Chapter 6 of my latest book, THE TYCOON, where the hero and heroine spot each other for the first time. Let me know if you think I’ve succeeded or failed in hooking your curiosity.