“By all these lovely tokens, September days are here.
With summer’s best of weather and autumn’s best of cheer.”
– Helen Hunt Jackson

Magical September waltzed in with her cooler temperatures and autumn splendor.

Let’s remember to:
Admire September’s magical sunsets and the harvest moon
Enjoy the beauty of goldenrod along our roadways.
Appreciate the last green leaves before Jack Frost hauls out his paint box
Take a few minutes to watch the rolling fog lift itself from the land.
Drink a glass of refreshing apple cider.
Call a friend and grab lunch to share in the fall merriment. 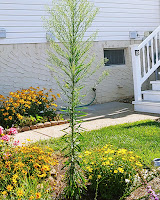 If I were to ponder the summer of 2022, I’d have to admit Central Pennsylvania had a hot humid season with temperatures rolling upward near ninety degrees many days. We received enough rain to encourage every weed in our flowerbeds to flourish. I grew a horse weed plant taller than I am. I filled buckets with purslane, plantain, dandelion, dollar weed, quack grass and clover. Humid conditions during the day and hot muggy nights encouraged white mold on many plants’ leaves, but our ferns went crazy, loving the humidity. Ironically, my tomato plants were stubbornly lazy and didn’t produce as well as they had in other years.

But now, it’s time to watch September spin the last of its magic as it blows a farewell kiss to us in less than a week. The hummingbirds have disappeared. Crows gather in noisy flocks. Geese honk farewell as they wing their way south.

Acorns plummet to the earth with a plop. Mushroom
silently pop up from the ground. Milkweed pods
burst open sending seeds sailing into the air on
fluffy floss. Pleasing scents fill the air: smoky wood
fires, hot chocolate, cinnamon and nutmeg spices,
roasts in the oven, and apple   and pumpkin pies.
Oh, and let’s not forget pumpkin spice coffee
sold in every establishment in town
In many northern states,  September delivers the first frost of the season and signals autumn is approaching. I love autumn because of the exquisite colors it brings. Maple trees cover our landscape in gold, scarlet, and orange. It’s a painter’s paradise.
September is also jacket weather on cool nights. It’s the season when we dig into the back of our closets and pull out those jeans, flannel shirts, and fleece coats. Dry leaves rustle beneath our feet when we take a walk in the brisk outdoors.

Do you have a favorite sign of the autumn season? Share it with others in the comments below. And watch out for those falling acorns!

JUNE - The Pianist
Book 1 in the Musical Christmas Series
Now on Sale for $0.99 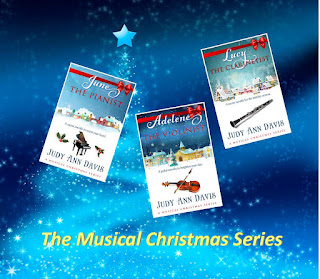